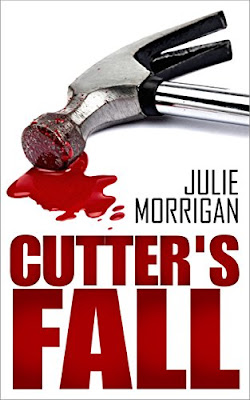 Cutter’s nightclub – the jewel in the crown of his business empire – is a burnt-out hulk. Despite his best efforts, he still doesn’t know who was responsible for torching the club … but he’s determined to find out and to make them pay.

Journalist Millie Redman is missing and young Jack Armstrong, whose sister Livvy lost her life after becoming involved with Cutter and his gang, sets out to discover what happened to her. When Gordon Cutter’s wife also disappears, he is certain Cutter is responsible. But can he prove it?

PC Rose Madsen is taking an interest in the search for Cutter’s missing wife. Her enquiries lead her into Cutter’s world, with potentially deadly consequences. Meanwhile, past actions and persistent paranoia mean Cutter’s firm is fragmenting. Can he hold it together, and also keep his secrets hidden?

Third and final book in Julie Morrigan's Cutter trilogy after Cutter's Deal and Cutter's Firm and one probably best read as part of the series and in order.

Fast paced with short, choppy chapters with three alternating points of view...... Gordon Cutter, himself and the main villain of the piece; Jack Armstrong - the young man still seeking to bring him down and get some justice for his dead sister, Livvy; and Rose, a new policewoman on the scene and as yet uncorrupted or tainted by the corruption in the local force which has most of the plod we meet in Cutter's pocket.

Best writing ever? No, but I really liked the story...... interesting characters, clearly drawn battle lines on who is good and who is a villain. While there's an over-riding story arc concerning justice or at least retribution for Livvy, there's other unfinished business from book two regarding a missing journalist and in this tome the disappearance of Cutter's second wife.

With out overly spoiling things, Cutter's chickens come home to roost - well it is kind of hinted at in the title.

Decent ending to the trilogy and an enjoyable two-sitting read. Did what it said on the tin.

I'll definitely try more from Julie Morrigan, probably when the reading hits a slump and I need something laced with adrenaline and some hard-hitting action, and not overly long.