Timothy Hallinan is another author I've been mean to try for a while but haven't yet got around to. 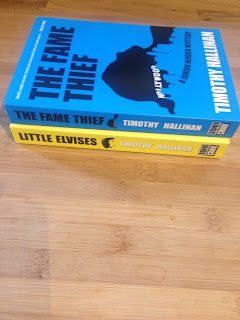 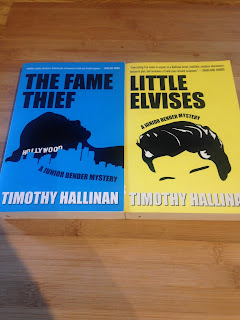 Hallinan has several series to his name.....

Simeon Grist - six books from the 80s and 90s and a seventh a few years ago,

and the series which attracts me most - Junior Bender, seven books in all between 2012 and 2018.

Junior Bender is a high-end burglar who moonlights as a private eye for crooks, in Los Angeles. Crashed is the series opener. Little Elvises and The Fame Thief are the second and third respectively.

JUNIOR BENDER UNTANGLES ONE OF THE WEIRDEST MYSTERIES IN TINSELTOWN

LA burglar Junior Bender has (unfortunately) developed a reputation as a competent private investigator for crooks. The unfortunate part about this is that regardless of whether he solves the crime or not, someone dangerous is going to be unhappy with him, either his suspect or his employer.

Now Junior is being bullied into proving aging music industry mogul Vinnie DiGaudio is innocent of the murder of a nasty tabloid journalist he'd threatened to kill a couple times. It doesn't help that the dead journalist's widow is one pretty lady, and she's trying to get Junior to mix pleasure with business. Just as the investigation is spiraling out of control, Junior's hard-drinking landlady begs him to solve the disappearance of her daughter, who got involved with a very questionable character. And, worst news of all, both Junior's ex-wife and his thirteen-year-old daughter, Rina, seem to have new boyfriends. What a mess.

There are not many people brave enough to say no to Irwin Dressler, Hollywood's scariest mob boss-turned-movie king. Even though Dressler is ninety-three years old, LA burglar Junior Bender is quaking in his boots when Dressler's henchman haul him in for a meeting. Dressler wants Junior to solve a "crime" he believes was committed more than seventy years ago, when an old friend of his, once-famous starlet Dolores La Marr, had her career destroyed after compromising photos were taken of her at a Las Vegas party. Dressler wants justice for Dolores and the shining career she never had.

Junior can't help but think the whole thing is a little crazy. After all, it's been seventy years. Even if someone did set Dolores up for a fall from grace back then, they're probably long dead now. But he can't say no to Irwin Dressler (no one can, really). So he starts digging. And what he finds is that some vendettas never die - they only get more dangerous.
Posted by col2910 at 00:19