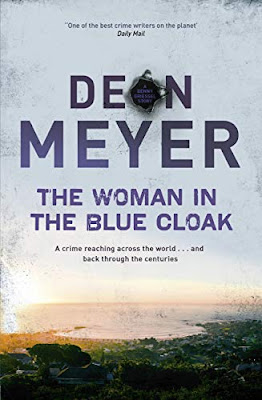 The Woman in the Blue Cloak is a brilliant novella which will thrill and entertain fans of Deon Meyer's much-loved detective Benny Griessel.

So Benny has a lot on his mind when he is called to a top-priority murder case. A woman's body is discovered, naked and washed in bleach, draped on a wall beside a picturesque road above Cape Town. The identity of the victim is a mystery, as is the reason for her killing.

Gradually, Benny and his colleague Vaughn Cupido begin to work out the roots of the story, which reach as far away as England and Holland... and as far back as the seventeenth century.

The Woman in the Blue Cloak was another enjoyable outing in the company Deon Meyer's Cape Town detective Benny Griessel. Instead of the usual 400 page plus novel, this one was a 160 page novella, with enough story and teeth to keep me interested.

It's an interesting starting point with an unidentified dead body and the local cops soon realising after a day or two, that it's a job for the big boys. Griessel and his partner Cupido draw the case. In a separate narrative we also have an anonymous man on the run, in fear of his life pursued by four men.

Establish the identity, investigate the victim - an overseas visitor and art expert with no real connection to South Africa and someone who has recently quit her job in the UK, track her movements and local contacts, especially those with a vicious, corrupt ex-cop known to Cupido and now one of Cape Town's leading PIs - Billy de Palma, get an art history lesson on Carel Fabritius, a pupil of Rembrandt and a well-regarded 17th Century Dutch artist in his own right and discover our victim was on the trail of an undiscovered Fabritius painting worth in the region of US $100m - a massive temptation to murder someone.

I really liked this one. I liked the blending of events from several centuries ago in a convincing murder investigation. I'm also minded to look into The Goldfinch by Donna Tartt - based on a real Fabritius painting - and a pivot point for events occurring here.

In addition to our murder, we also get to admire Griessel's ongoing sobriety - 147 days and counting and fret with him over the source of financing for the 22000 Rand engagement ring he hopes to buy for his intended future wife.

Overall verdict - a brief and engaging outing in familiar company. That's two Meyer-Griessel books I've enjoyed in a matter of months. Hopefully I can schedule my reading to accommodate something else by him this year as I've yet to be disappointed in his work.