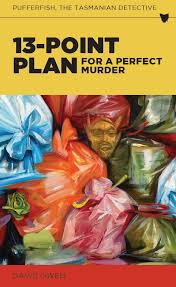 Tasmania's rise and rise as a tourist destination makes the island an ideal location for the cashed-up international polo set, jetting in from Europe, Buenos Aires, Shanghai and LA for their late summer carnival and relaxathon in the world's latest clean-green hotspot. They play fiercely and party hard at the swish Polo Palace, built near beautiful beaches through the largesse of an island-loving, polo-mad billionaire Bahraini businessman.

So when this idyll is gruesomely interrupted by the murder of Sebastian Wicken, a dashing and wealthy Englishman famous for wielding his stick and ball, Pufferfish, aka seasoned Detective Inspector Franz Heineken of the Tasmanian Police Force, is called to investigate. And investigate he does.

For starters, what possible relationship could there be between this visiting bludgeoned aristocrat and Tassie's worst-of-the-worst career villain, psychopathic Morgan Murger? What ghastly behaviour unites them in blood?

Pufferfish and his offsiders Rafe and Faye work double time to try and fathom who did what to whom, and why - while keeping an antsy tourist industry at bay - but then the strange intrusion of a quavery voice from rural England, being Sebastian's aunt Eugenie, deepens the mystery.

Meanwhile Faye, against advice, has got herself personally involved in the theft of a stamp album from a workingclass primary school. Silly kids and all that. Except it's no ordinary stamp album, sucking in and mightily distracting Pufferfish from the politically-charged polo mess.

As if all of this is not enough, an old Pufferfish flame, diminutive beauty Milly de Havilland cruises back into town from his distant past, when she'd given great comfort to the then young Dutch throwaway cop Franz Heineken, an emotional wreck washed up on remote Tasmania's shore. And, as it happens, Pufferfish's close de facto Hedda is currently overseas ...

13-Point Plan is the seventh Pufferfish book in total and my third outing with our intriguing Tasmanian detective Franz Heineken. It’s been a long while since I read the first couple and memory of the previous two outings is dim. Within a few pages though, I felt like I was catching-up with an old acquaintance.

We have an exotic setting of Tasmania, our older slightly grumpy detective and a couple of younger underlings and a murder site with two bodies – one a low-level criminal and the other a globe-trotting high-living polo player – what’s the connection apart from the fact they’re both dead – if there is one.

Heineken and his team try to solve both murders; all the while Heineken buffering his colleagues from a bit of political interference – after all it wouldn’t pay to upset the rich and powerful and unduly affect the influx of mad money into the Tasmanian economy – while also keeping at arm’s length or further an old flame from way back when. The arrival of said former beau, somewhat inconveniently coinciding with the absence of his current amour.

Another act, a schoolboy theft of a stamp album, also draws some attention from our enigmatic detective, albeit reluctantly. An interesting diversion from our two murder victims.

More cerebral than action driven, this mystery was enjoyed and savoured and read at a pedestrian pace as opposed to raced through. All the better for enjoying Pufferfish’s pithy observations and philosophy. The narrative style is instantly recognisable as author David Owen – well it is if you’ve enjoyed him before.

Regarding murder, we, whose job it is to know, almost always know, soon after a murder and frequently prior to the act, who committed the crime, because most are domestics. Or the victim and villain knew one another. Or the motive is the clue, especially revenge.

IN THIS BUSINESS, we generally delude ourselves that we’ve seen all there is to see, know all there is to know, until a new set of criminal behaviours comes along and washes that experience away, and we have to start all over again, and work it out. Only then do you think you know everything, for a while.

Enjoyed and savoured, entertained and satisfied. I won't be leaving it as long again next time before revisiting Tasmania and Pufferfish. 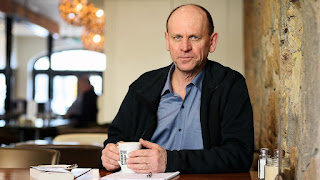 X AND Y and THE DEVIL TAKER sit on the paperback pile, which means I read PIG’S HEAD and A SECOND HAND way back when.

NO WEATHER FOR A BURIAL and HOW THE DEAD SEE (the 5th and 6th series books) are on the Kindle. An eighth Pufferfish ROMEO’S GUN hit the shelves recently.

Author David Owen was born in Zimbabwe and emigrated to Australia in the 80s. For a bit more on him and some reviews of his books, see his page on Aust Crime Fiction website.