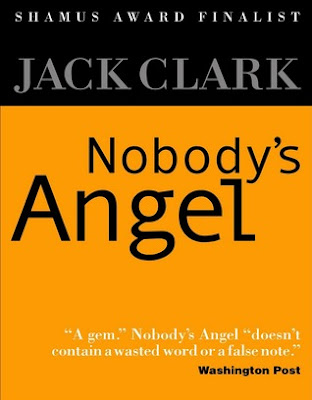 While Chicago cabbie Eddie Miles drives the city streets at midnight, two killers--one targeting prostitutes, the other cab drivers--are out plying their trade.

"From the driver's seat of his cab, Eddie negotiates a city splintered by race and class and rapidly losing its economic underpinnings. Nobody's Angel has the wry humor and engaging characters typical of the best of the hard-boiled genre, but Clark's portrait of Chicago in the 1990s, with its vanishing factories and jobs, its lethal public housing projects, its teenage hookers climbing into vans on North Avenue, is what gives it legs. Sure there are a couple murderers on the loose, but the larger violence is coming from systemic forces wreaking havoc in a place that, maybe, used to be better." -- Chicago Reader

"'Nobody's Angel' is a gem...which doesn't contain a wasted word or a false note... Its real beauty lies in Eddie's bittersweet existence and the special romance and danger of the cabdriver's life--lives we often glimpse but rarely give a second thought." -- Washington Post

"[A] fine atmospheric thriller. The cynical, melancholy cabbie point of view is perfect for this kind of neon-lit, noir-tinged, saxophone-scored prose poem, and Clark hits all the right notes." --Booklist

Shamus Award finalist, Nobody’s Angel was the last book I read in 2016 and a great book to sign off on the year with.

Penning a few thoughts on this over seven months after reading the thing is inevitably a bit tricky. My memory isn’t what it used to be. What still rings loud and clear is the setting of Chicago in the 90s and its portrayal through the eyes of our main protagonist, cab driver Eddie Miles.

The fact that we have a murderer targeting cab drivers and another one taking out prostitutes is kind of incidental. I’d have been entertained if it had been a normal few weeks in the life of Miles, giving me a sight-seeing tour around Chicago. We see the competition and camaraderie between the drivers and the way they view their customers. The rides they pick up, the lightning quick profiling of the clients they avoid, the areas they steer around rather than drive through. The myriad of rules and regulations the city imposes on them. Each of these used as chapter intros -

In addition to Eddie’s company and our traversing of Chicago’s streets, we have a pretty good murder mystery. Stopping for a back alley comfort break, Eddie discovers the near dead body of a young prostitute. We have some interaction with the police as they open an investigation. Eddie’s contact with the detectives on the case continues through the book, as does a follow-up with the victim, whose life he helped save.

Additionally one of his cab drivers friends gets murdered and Eddie is puzzled as to the circumstances of his demise. His friend was too sharp and street-wise to have been in the particular area of the city he was found, at the time he met his end. I wouldn’t class Eddie’s involvement thereafter as a bit of amateur sleuthing, more musing out loud as to the whys and the wherefores and the keen eye subsequently applied to his interactions with customers, fellow drivers, the police and pretty much everyone who crosses his path.

Really enjoyable – setting, character, pace, plot, resolution, length. A book that I would have been happy restarting just as soon as I’d finished it.

There’s a few more from him on the Kindle – Dancing on Graves, Highway Side and Westerfield’s Chain.  There was a second Eddie Miles book released last year – Back Door to LA.