CRIME FICTION ALPHABET: U IS FOR ........ UHNAK, UTAH, UNDER THE BRIGHT LIGHTS

Another week another slice of crime fiction from my collection. This week........ U

Dorothy Uhnak ....... Uhnak was a NYPD police officer turned author. Her semi-autobiographical work Policewoman was the basis for the Angie Dickinson TV show of the 70s, something I dimly remember.

The "original policewoman," Dorothy Uhnak was the first to write a procedural novel with a female cop as the protagonist. But before she turned her talents to fiction, Uhnak was a detective with the New York Transit Police. Policewoman chronicles her fourteen years on the force, where she was decorated twice for bravery.

This insider's view of law enforcement takes you behind the scenes into a city that was a no-man's land of corruption, drugs, and violence. Uhnak recounts the hurdles facing a female cop during New York's tumultuous 1950s and '60s, and the difficult adjustment to a new way of life once she gets her badge. She takes readers from firearms training to homicide scenes to interrogation rooms where detectives extract confessions. As gritty and relentless as Uhnak's novels, Policewoman is a book that will keep you on the edge of your seat until the last, spellbinding page is turned.

Uhnak wrote about 10 books in all, including a three book series featuring Christie Opara. I've read her standalone - Codes of Betrayal (1997) back in 2014 and enjoyed it well enough to track down a few more of her books. The Witness is the second book in the Opara series. 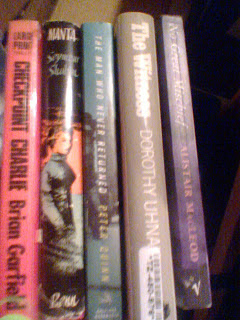 Christie Opara, the only woman on the DA's Special Investigation Squad, is assigned by her boss to shadow his daughter to a civil rights demonstration. An ugly group of hecklers soon turns the demonstration into a riot and someone gets shot. A cop with a bewildered look on his face stands over the body with a revolver in his hand.

The crowd and the public cry for the cop's blood in the days to come. Only Christie, who was standing next to the cop, saw another person pull the trigger. Now she must find the real murderer before matters get totally out of hand . . .

Utah ...... and not the home of too much crime or mystery fiction from what I can see. I do have one book on order and written by an author born in Salt Lake City and set there as well.

At least, I'm sorted for when I eventually get back to an ongoing US 50 States Reading Challenge.

The trouble with Caitlin is that she's obsessed with her work as a crime reporter. And troubled by it. The scenes she writes about stay with her when she's in bed with her husband at night and when she's driving the children to school in the morning.Things go from bad to worse when Caitlin's older brother disappears. Not only is the era ire extended family thrown into a crisis, but the closer they become and the more they learn about each other, including a startling revelation about a hushed-up family suicide, the more uncomfortable they feel.

All in all Caitlin's is probably a typical Salt Lake City family. But Linda Sillitoe peels back layers of pretense in a story that begins like a dream that one remembers only well enough to be unnerved by. For Caitlin, it is a nightmare that has become real.

Under the Bright Lights from Daniel Woodrell

It's the first in the three book Rene Shade series.
Muscle for the Wing and The Ones You Do are the ohters 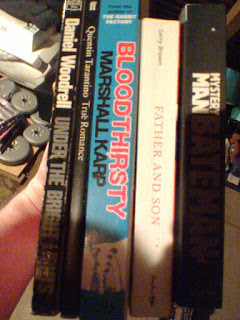 
It seemed a simple enough case for the authorities. Too bad the dead man was a prominent black city council man. But for the police detective Rene Shade it all looked too neat. Shade takes on city hall as he follows a twisting trail through the sleazy streets of the Cajun quarter into the murky swamps and bayous that ring the city. It is a trail that leads to corruption and yet more murder.