Hakan Nesser and The Mind's Eye - The first book in the Inspector Van Veeteren series. There's 10 in total in this series and I have about 4 or 5 of them, but I've never begun it. 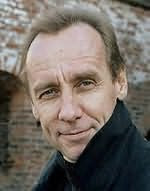 The highly anticipated first novel in the Inspector Van Veeteren series in now available in English. At last, American readers will be able to enjoy, from its very beginnings, this addictive series by one of Europe's most beloved and best-selling crime writers.

Chief Inspector Van Veeteren knew that murder cases were never as open-and-shut as this one: Janek Mitter woke one morning with a brutal hangover and discovered his wife of three months lying facedown in the bathtub, dead. With only the flimsiest excuse as his defense, he is found guilty of a drunken crime of passion and imprisoned in a mental institution.

But Van Veeteren's suspicions about the identity of the killer are borne out when Mitter also becomes a murder victim. Now the chief inspector launches a full-scale investigation of the two slayings. But it may only be the unspoken secrets of the dead'"revealed in a mysterious letter that Mitter wrote shortly before his death'"that will finally allow Van Veeteren to unmask the killer and expose the shocking root of this sordid violence.

Roger Smith and Dust Devils and some South African crime. I've enjoyed Roger Smith's work before - Mixed Blood (2009) and Ishamel Toffee (2012). I can't beleive I last read him in 2013.

This is an unflinching portrayal of the dark side of the new South Africa, where to avenge what he loves, Robert Dell becomes what he hates. On the run after being framed for murdering his family, South African journalist Robert Dell's only ally is his oldest enemy: his father. Bobby Goodbread, an ex-CIA hitman just sprung from prison for atrocities he committed whilst in the employ of the apartheid regime, joins his son on a bloody cross-country road trip, bringing his killing skills and his hunger for redemption. From picture-postcard Cape Town to a Zulu tribal valley where AIDS, savage feuds and poverty have left the population as gutted as the parched red earth, father and son hunt down assassin Dog Mazibuko, uncovering a conspiracy that reaches to the highest levels of the South African State. They cross paths with another man on a desperate mission: ex-investigator Disaster Zondi, returning to the place he fled as a youth to rescue a teenage girl - who may or may not be his daughter - sold into marriage to Mazibuko. These men are thrown together in a spiral of violence and retribution in a country where corruption and anarchy have replaced brutal tyranny and human life has never been cheaper.

Smith - Brad Smith and Red Means Run. Smith is a Canadian novelist that I have yet to try. 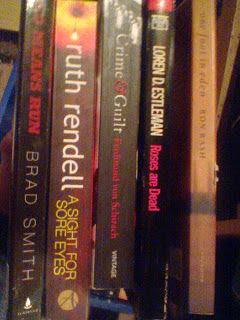 Brad Smith, a 'funny, poignant, evocative' (Dennis Lehane) crime novelist, debuts a new series set in upstate New York featuring jack-of-all trades, Virgil Cain, who must clear his name of two murders while on the run from the law in this spirited country noir.

Mickey Dupree is one of the most successful criminal attorneys in upstate New York, having never lost a capital murder case. That is the upside of being Mickey. The downside: Mickey has a lot of enemies and one of them drives the shaft of a golf club through his heart, leaving him dead in a sand trap at his exclusive country club.

The cops, led by a dim-witted detective named Joe Brady, focus their attentions on Virgil Cain. Just two weeks earlier Virgil told a crowded bar that 'somebody ought to blow Mickey's head off,' after the slippery lawyer earned an acquittal for Alan Comstock, the man accused of murdering Virgil's wife. Comstock, a legendary record producer, gun nut, and certifiable lunatic, has returned to his estate, where he lives with his wife, the long suffering Jane.


It appears to Virgil that the fix is in when Brady immediately throws him into jail with no questions asked. In order to set things right, Virgil escapes from jail, determined to find Mickey's killer himself. Aside from a smart and sexy detective named Claire Marchand, everybody is convinced that Virgil is the culprit. When Alan Comstock is discovered with six slugs in his body the day after Virgil's escape, his guilt is almost assured. Now it is up to Virgil to convince everyone of his innocence - by finding the killer before he winds up as the next victim.

Silent Joe from T. Jefferson Parker. Parker is another author I probably haven't read for about 10 years and I don't know. Laguna Heat, Little Saigon and Pacific Beat were enjoyed back in the day. 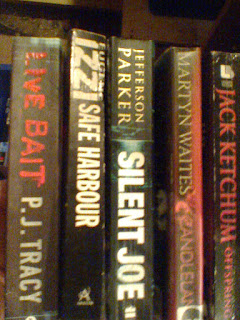 Atmospheric, complex and intelligent psychological suspense from the bestselling author of The Blue Hour and Red Light With the horrible remnants of a childhood trauma forever visible on his face, Joe Trona is scarred in more ways than one. Rescued from an ophanage by Will Trona, a charismatic Orange County politician who sensed his potential, Joe is swept into the maelstrom of influence and intimidation that surrounds his adoptive father's illustrious career. Serving as Will's right-hand man, Joe is trained to protect and defend his father's interests -- but he can't save him from his enemies. Will Trona is murdered, and Joe will stop at nothing to find out who is responsible. Sifting through his father's life -- acquaintances, deals, enemies and lovers -- looking for clues, Joe comes to realize how many secrets Will Trona kept, and how many people he had the power to harm. But two leads keep rising to the surface: a little girl who was kidnapped by her mentally disturbed brother, and two rival gangs who seem to have joined forces. And as Joe digs deeper, he is forced to confront his own childhood abuse as the different threads of the investigation begin to intersect.