Neville 'Pagga' Palmer is an over-sexed, run-of-the-mill doorman with delusions of grandeur. Despite being terrified of his local rivals and thicker than a whale omelette he's convinced that he's a highly trained spy who is simply 'sleeping' until needed by the security services. This isn't a scenario that anyone who has ever met him would think likely...until one day an upper-class, blonde-haired spook asks him to sign the official secrets act and tells him that his services are required for Queen and country...

Bad guys beware 'cos Pagga's coming to save the world!

A bit of a daft one to lighten the mood and one I thoroughly enjoyed without feeling like I'd just read the book of the century.

70-odd pages long, a bit laddish in tone with a likable main character, totally lacking in self-awareness and oblivious to how those around him perceive him.

Small town community, a plot which strains the bounds of credibility but which I was happy to buy into, a bouncer, drunks, trouble makers, a bargain basin tart - cheaper than a pound shop, a secret mission, more troublesome youths, job rivalry, the girl of his dreams and a happy ending in more ways than one. 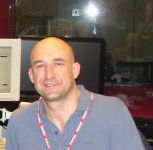 Bawdy, funny, rude, crude, probably not everyone's cup of tea, the sort of thing Paul D. Brazill and Charlie Williams might come up with after a weekend out on the lash.

I have something else from Andy Rivers which has languished on the kindle for about 5 years or more - Maxwell's Silver Hammer. Hopefully I don't forget it in a few week's time as I think I'd have some fun if this one is anything to go by.