Aberdeen....... granite city in North of Scotland and the setting for Claire MacLeary's Cross Purpose, a novel I really enjoyed. Cross Purpose is the opener in her Maggie and Wilma series. 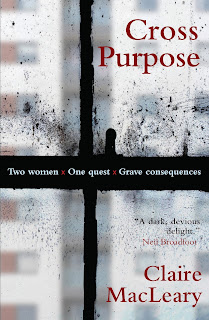 When Maggie Laird's disgraced ex-cop husband suddenly dies, her humdrum suburban life is turned upside down. With the bills mounting, she takes on his struggling detective agency, enlisting the help of neighbour ‘Big Wilma’. And so an unlikely partnership is born.

But the discovery of a crudely mutilated body soon raises the stakes... and Maggie and Wilma are drawn into an unknown world of Aberdeen's sink estates, clandestine childminding and dodgy dealers.

Cross Purpose is surprising, gritty, sometimes darkly humorous – a tale combining police corruption, gangs and murder with a paean to friendship, loyalty and how ‘women of a certain age’ can beat the odds.


Stuart MacBride's Logan McRae series is also set in Aberdeen, the early ones at least. The series is about 12 books long. Pretty sure I read Cold Granite, the first but I've kept it, so maybe false memory. I can't remember anything about it if I did.

One thing probably holding me back from immersing myself in the series (other than more books than available time to read them) is the apparent length. They all have the appearance of house bricks. I'm a less is more kind of guy - that's the line I've fed my wife for over 30 years anyway. 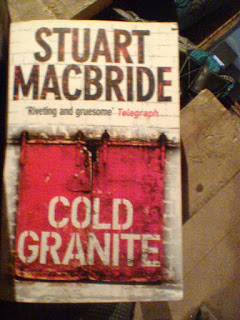 The debut thriller from a bright new Scottish talent set to rival Ian Rankin. It's DS Logan McRae's first day back on the job after a year off on the sick, and it couldn't get much worse. Four-year-old David Reid's body is discovered in a ditch, strangled, mutilated and a long time dead. There's a killer stalking the Granite City and the local media are baying for blood. If that wasn't enough, Logan also has to contend with a new boss, DI Insch, who doesn't suffer fools gladly and thinks everyone's a fool, and his own ex-girlfriend, the beautiful but chilly Isobel MacAlister, who also happens to be the chief pathologist. The only good news is WPC 'Ball Breaker' Watson, Logan's new guardian angel. The dead are piling up in the morgue almost as fast as the snow on the streets, and Logan knows time is running out. More children are going missing. More are going to die. If Logan isn't careful, he's going to end up joining them. Set in Aberdeen, where the rainy season lasts all year, criminal gangs vie for supremacy on the streets and the oil industry brings an influx of wealth and vice, this is a gritty, powerful and page-turning debut thriller by a writer with a wonderfully observant eye and a characteristically Scottish sense of gallows humour. 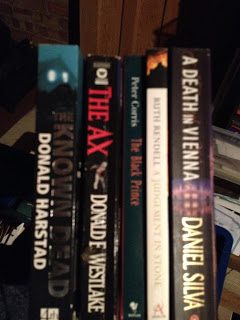 For 25 years, Burke Devore has provided for his family and played by the rules. Until now. Downsized from his job, Devore is slipping away: from his wife, his family, and from all civilized norms of behavior. He wants his life back, and will do anything to get it. In this relentlessly fascinating novel, the masterful Westlake takes readers on a journey of obsession and outrage inside a quiet man's desperate world.

Abbott...... Megan, Patricia or Jeff - from the stacks in front of me.

I've not read her yet, though everything I've seen written about her work tells me its very good. I have a couple on the pile - Die a Little and Queenpin 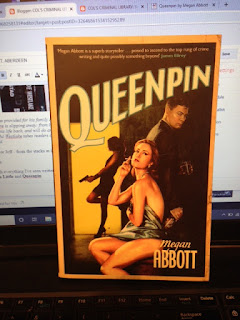 A young woman hired to keep the books at a down-at-the-heels nightclub is taken under the wing of the infamous Gloria Denton, a mob luminary who reigned during the Golden Era of Bugsy Siegel and Lucky Luciano. Notoriously cunning and ruthless, Gloria shows her eager young protegee the ropes, ushering her into a glittering demimonde of late-night casinos, racetracks, betting parlors, inside heists, and big, big money. Suddenly, the world is at her feet -- as long as she doesn't take any chances, like falling for the wrong guy. As the roulette wheel turns, both mentor and protegee scramble to stay one step ahead of their bosses and each other.
Posted by col2910 at 00:06