A bit of a culture vulture last month with a trip to the capital for a couple of days with my wife.... kind of a combo mini break to celebrate another birthday.


Car to Highgate, London, park up, tube to the West End, lunch Leicester Square and a stroll around Covent Garden and Soho. Followed by.......

School of Rock The Musical 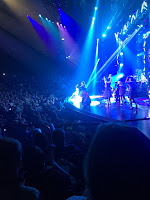 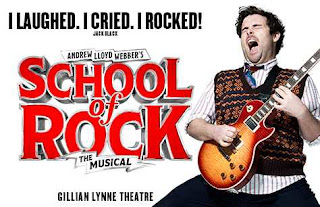 I wasn't quite sure what to expect here. It was one of my children's favourite films growing up and I've lost count of the number of times we've watched it over the years. They'll still watch it to this day, given the chance.

An absolutely fantastic show, great seats - quite close to the action though a bit off to one side. The lead actor in the Jack Black film role - Dewey - brings a manic energy to the stage. I didn't buy a programme so couldn't tell you his name.

The musical remains quite faithful to the film, so we knew the songs and a few of the scenes in advance. I was happy the Stevie Nicks - Edge of Seventeen jukebox bit was in there. The kids in the cast were amazing. A real fun time was had.


Overly enthusiastic guitarist Dewey Finn (Jack Black) gets thrown out of his bar band and finds himself in desperate need of work. Posing as a substitute music teacher at an elite private elementary school, he exposes his students to the hard rock gods he idolizes and emulates -- much to the consternation of the uptight principal (Joan Cusack). As he gets his privileged and precocious charges in touch with their inner rock 'n' roll animals, he imagines redemption at a local Battle of the Bands.


A bite to eat afterwards then back to Shaftesbury Avenue and the Comedy Carnival. 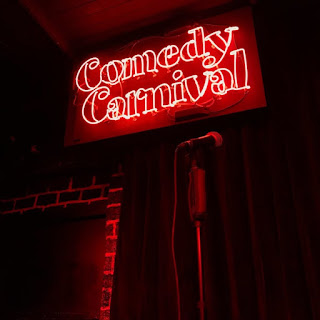 My son got us tickets in the form of a Virgin Voucher as a Christmas present. The voucher has a limited duration and which was redeemed on the last night before expiry.

I've only seen one comedian previously - Michael Barrymore at Caesar's in Luton, long before his fall from grace.

I knew enough to decline seats in the first couple of rows as I kind of think any comedian - audience interaction with me would have kind of spoiled my enjoyment of the show and I would have been on tenterhooks throughout. Far more relaxing to sit on row 10 in the shadows!

I don't think I had seen any of these guys before on the TV, but all were very good, very funny with different subject matter in their routines. Comedy is obviously very subjective and not everything hit the mark.

More to like than not......... Brexit, sex, Facebook, Twitter, the NHS, grannies, toilet jokes, relationships, audience interaction, family, Australia, Eastern Europeans, tolerance, the weather, hedge fund managers, and a gazillion other things besides.

My favourite was Jack Hester, an Irish comedian. Followed by a tie between Bobby Mair and the MC who knitted the whole thing together - Pete Gionis


Pete Gionis on You Tube - https://www.youtube.com/watch?v=5qXw0XhXb7M

Bobby Mair on You Tube - https://www.youtube.com/watch?v=xvNoe0HZnVc

Freddy Quinne on You Tube - https://www.youtube.com/watch?v=2wDeQXwkVWI

Jack Hester on You Tube - https://www.youtube.com/watch?v=5FYvkO7We4o

Finlay Christie on You Tube - https://www.youtube.com/watch?v=VBcqpg5mWSY

Next day, a walk from Kensington through Hyde Park, past Princess Diana's Memorial Fountain and onto Oxford Street

I could see them setting up for Winter Wonderland which is one to avoid in about a month's time. 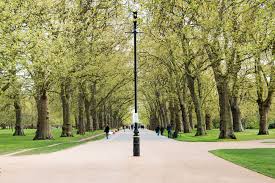 Shot in Soho ......well worth a fiver of anyone's money though I would have preferred it if some of the photos on display had been slightly larger and there were a few more of them.

There's a book to accompany the exhibition which offers more than what you see on the walls of the gallery, as well as text giving a narrative regarding the images. I would have liked it, but after flicking through kind of thought the price a wee bit steep. 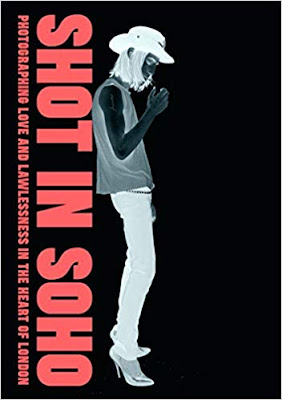 During a time of development and change that has the potential to transform the unique character of London's Soho, this book delves into the area's storied past as a place of disobedience and eccentricity. Opening with a look at Soho through the years, this book includes archival images of Suffragettes learning Jiu-jitsu in a Soho gym, David Bowie preparing to record at Trident Studios and Francis Bacon drinking at the French House. The book then presents the work of photographers who have shed light on Soho's many faces through the decades, including Kelvin Brodie, Clancy Gebler Davies, Corinne Day, William Klein, and Anders Petersen. Also featured is a new series of work by young, up-and-coming photographer Daragh Soden, whose images were specially commissioned by The Photographers' Gallery for this project. These streetscapes and portraits are by turns intimate and haunting, visceral and vibrant, nostalgic and provocative. Throughout the volume, texts narrate a social history marked by subculture and controversy. This book captures Soho as a refuge for marginalised, pioneering, and unconventional people. 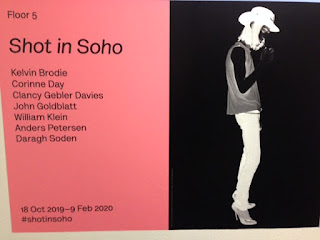 Shot in Soho is an original exhibition presented at The Photographers’ Gallery celebrating Soho’s diverse culture, community and creativity at a time when the area is facing radical transformation.
The imminent completion of Cross Rail (a major transport hub being built on Soho’s borders) in Autumn 2019, makes the area a prime target for development and threatens it existence as a place of unorthodoxy and independence.
Shot in Soho offers a timely opportunity to see the area through the lens of renowned photographers, such as William Klein, through a rare presentation of his candid 1980s Sunday Times commissioned photo essay; Anders Petersen, through a selection of his 2011 Soho series, which capture the neighbourhood with his trademark lyrical melancholy; Corinne Day, whose images take us off the streets into her Brewer St. home where some of her most iconic editorial and personal work was shot; as well as work from less familiar figures such as Times photographer Kelvin Brodie’s night-time forays with police teams, John Goldblatt’s strip club dressing room scenes and Clancy Gebler Davies’s work in The Colony Room Club. The exhibition features a commission from artist, Daragh Soden who will present a new body of work focusing on Soho’s reputation as a place of connection, performance and the pursuit of love.
For full up to date information, go to the Shot In Soho exibition page.

There was also a second exhibition in the Gallery which was enjoyed... 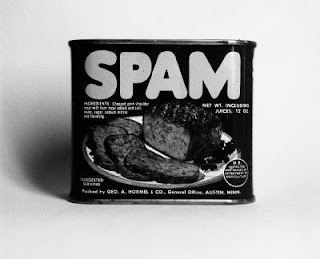 Feast for the Eyes – The Story of Food in Photography

Exploring the rich history of food photography through some of the leading figures and movements within the genre including: Nobuyoshi Araki, Nan Goldin, Martin Parr, Man Ray, Cindy Sherman, Wolfgang Tillmans and Weegee.
Encompassing fine-art and vernacular photography, commercial and scientific images, photojournalism and fashion, the exhibition looks at the development of this form and the artistic, social and political contexts that have informed it.
Food has always been a much-photographed and consumed subject, offering a test ground for artistic experimentation and a way for artists to hone their skills. But even the most representative images of food have rarely been straightforward or objective. Food as subject matter is rich in symbolic meaning and across the history of art, has operated as a vessel for artists to explore a particular emotion, viewpoint or theme and express a range of aspirations and social constructs. With the advent of social media, interest in food photography has become widespread with the taking and sharing of images becoming an integral part of the dining experience itself, used as instant signifiers of status and exacerbating a sense of belonging and difference.
Feast for the Eyes looks particularly at how food is represented and used in photographic practices and brings together a broad-range of artists all of whom harness the history and popularity of food photography to express wider themes. Crossing public and private realms the works on show evoke deep-seated questions and anxieties about issues such as wealth, poverty, consumption, appetite, tradition, gender, race, desire, pleasure, revulsion and domesticity.
Presented over two floors, and featuring over 140 works, from black and white silver gelatin prints and early experiments with colour processes to contemporary works, the exhibition is arranged around three key themes: Still Life traces food photography’s relationship to one of the most popular genres in painting and features work that is both inspired by the tradition and how it has changed in the course of time. Around the Table looks at the rituals that takes place around the consumption of food and the cultural identities reflected through the food we eat and people we eat with. Finally, Playing with Food shows what happens when food photography is infused with humour, fun and irony. The exhibition will also feature a number of magazines and cookbooks which provide an additional visual and social history of food photography.
Feast for the Eyes traces the history and effect of food in photography, simultaneously exploring our appetite for such images while celebrating the richness and artistic potential of one of the most popular, compulsive and ubiquitous of photographic genres.

Celebration over for another year - home and feet up!
Thanks to my wife for her amazing company!
Posted by col2910 at 23:44