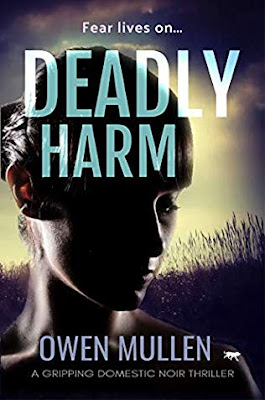 It’s been five years since Mackenzie Darroch was abducted and held captive in a derelict house.

She thought she'd found her way out of the darkness. She was wrong.

When she witnesses a car crash and saves the driver’s life, it sets in motion a chain of events that will alter both their futures.

The two women get involved in a high profile police case and draw the attention of a ruthless reporter. Gina Calvi is convinced Mackenzie is not what she appears and is prepared to do anything to prove it.

Meanwhile, across the city, Kirsty McBride, a young single mother, is persuaded to leave a violent relationship. Her partner, Malkie Boyle a Glasgow hardman, is due to be released from prison. Once back on the street and bent on revenge, Boyle is determined to find the people responsible for stealing his family from him.

Can Mackenzie save them or will Boyle get his revenge?


Owen Mullen is the best-selling author of In Harm's Way. Deadly Harm is a loosely connected sequel, but can also be read as an unmissable stand-alone. An electrifying psychological thriller, it will appeal to fans of authors like Mark Edwards, Gillian Flynn and Ann Cleeves

A bit of Scottish crime and a fast-paced story combining domestic abuse, murder, revenge, journalistic ambition and a dash of romance.

I read Mullen's In Harm's Way which features several of the characters encountered in this book. Mackenzie Darroch was a victim in the previous book, Andrew Geddes was a cop. Mackenzie is now running a refuge for abused women and Geddes is still a policeman. Their paths cross when Geddes tries to get Mackenzie to help a young girl and her baby. Kirsty and her child are at risk from an abusive partner, though have little confidence in any of the authorities. In addition to the limited assistance she provides to the girl, our lead also gets sucked into providing some off the books support to another traumatised victim, currently receiving sanctuary at the refuge she runs. Caitlin has been saved by Mackenize once, getting rescued from her crashed vehicle after fleeing her husband in the dead of night. Lightning strikes twice when he tracks her down and attacks her. Events spiral out of control, hasty actions are taken and rash decisions are made. Decisions from which there is no turning back.

The book moves fairly quickly and with several story lines running through the narrative and over-lapping - Caitlin, her husband and the aftermath; young Kirsty, the authorities, the scrote of a boyfriend - Malkie Boyle and a vicious lesson taught; Andrew Geddes, his colleagues, his cases, his boss, his solitude, his attraction to Mackenzie. Mackenzie herself is juggling a few balls - the refuge, the well-being of her charges, the guilt over perceived failings especially concerning Kirsty, another victim to save, a relationship with Andrew, secrets she's holding, and the attentions of a journalist on the hunt for a headline. Malkie Boyle and the manhunt for him and his re-connecting with his estranged grandfather also provides the book with more excitement and mileage.

I probably found some of the actions taken a wee bit implausible and a bit of a stretch to accept. The initial knee jerk responses to certain situations I was fine with, the subsequent decision making afterwards, I was less convinced by. Additionally, the willingness of the journalist to debase herself for a lead on her story was also a bit ..... hmm, really? That said I was prepared to stick with the author and the book and see where we got to. And we got there fairly quickly.

Plenty of excitement, decent characters you could root for, as well as a few individuals you could take against, interesting setting in semi-rural Scotland, with a few trips to slightly better known locations - Glasgow and the coastal town of Ayr. Lots to like here, without being the best book ever.

There's a few more from him on the TBR pile.