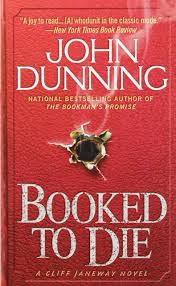 Denver homicide detective Cliff Janeway may not always play by the book, but he is an avid collector of rare and first editions. After a local bookscout is killed on his turf, Janeway would like nothing better than to rearrange the suspect's spine. But the suspect, local lowlife Jackie Newton, is a master at eluding the law, and Janeway's wrathful brand of off-duty justice costs him his badge.

Turning to his lifelong passion, Janeway opens a small bookshop - all the while searching for evidence to put Newton away. But when prized volumes in a highly sought-after collection begin to appear so do dead bodies. Now Janeway's life is about to start a precarious new chapter as he attempts to find out who's dealing death along with vintage Chandlers and Twains.

"A knockout... One of the most enjoyable books I've read in a long time." - The Denver Post

Booked to Die is the first in John Dunning's series featuring Cliff Janeway. Janeway is a cop, then an ex-cop turned bookshop owner. This one's a fantastic read with lots going on..... a feud between a cop and a psychopath responsible for the deaths of some itinerants, but still a free man - Janeway frustrated by a combination of lack of evidence and some smart lawyers; our cop with a knowledge and a keen interest in books (a subject close to my own heart); a murder in the book world and a further coming together of our two combatants Cliff Janeway and head-case Jackie Newton; resulting in a career change, some new friends, some off the records investigating and an escalation in Janeway and Newton's ongoing private battle.

When a book is so enjoyable it's sometimes hard to articulate just exactly what it is that makes it just so memorable.

Without being able to do this one justice, we have.... character, pace, story, setting - time frame of 1986 and the locale - Denver and books, bookshops, bookscouts, book dealers, and collectors; a pair of combatants locked in a private battle, each unwilling to yield to the other, one a good guy, one the personification of evil; murder, rape, intimidation, an obsession, a career burned, a field day for the press, a dream turned reality, the book business - the highs and lows, the pitfalls and windfalls, the hunt, the chase, the connections, the rivalries, the friendships, the favours, the optimism......... not forgetting - a murder to solve and some unfinished business with a bit of romance chucked in along the way.

One of the front cover blurbs states its a "whodunit in the classic mode." I haven't read enough of these types of books to confirm whether the comparison is apt. I do know that I loved every page of this one. There's fisticuffs, violence and brutality present which may be at odds to the classic whodunit, which suggest a more genteel way of doing things, but they suit the book perfectly and are sporadic occurrences to suit the story, as opposed to a vehicle constantly propelling the tale forward. There are lulls in the action, but the book maintains its drive and momentum. Action blended with thought.

Ticks in every box. I'm off to track down the second in this five book series featuring Cliff Janeway.

*As an added source of pleasure, my 2001 edition published by Pocket Star Books has an entertaining introduction by the author chatting about his novel and it's early collectability as well as other bits and pieces about books, scarcity and his experience in the field of dealing and collecting.
Booked to Die won the Nero Award and was nominated for the 1993 Anthony Award in the "Best Novel" category