HEATHER HARPER ELLETT - AIN'T NOBODY NOBODY (2019) 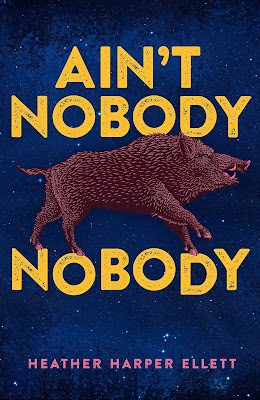 Still reeling from the scandal that cost him his badge, Randy Mayhill―fallen lawman, dog rescuer, Dr Pepper enthusiast―sees a return from community exile in the form of a dead hog trapper perched on a fence. The fence belongs to the late Van Woods, Mayhill’s best friend and the reason for his spectacular fall.

Determined to protect Van’s land and family from another scandal, Mayhill ignores the sheriff who replaced him and investigates the death of the unidentified man. His quest crosses with two others: Birdie, Van’s surly, mourning daughter, who has no intention of sitting idly by and leaving her father’s legacy in Mayhill’s hands; and Bradley, Birdie’s slow, malnourished but loyal friend, whose desperation to escape a life of poverty has him working with local criminals, and possibly a murderer.

A riveting debut novel about family and loyalty, old grudges and new lives, AIN’T NOBODY NOBODY is like a cross between Faulkner and “Breaking Bad”, from a talented new writer with an authentic Texas voice.

Family, friendship, loss, grief, regrets, duty, loyalty, dogs, hogs - lots of them, depression, scorn of a community, loss of respect, drugs, decisions and a dead body on a fence.

An enjoyable novel set in backwoods East Texas where the feral hogs outnumber the people. Former sheriff, Randy Mayhill feels guilt at the part he played in his friend's apparent suicide and aims for redemption when a dead body pitches up on his friend's land. Mayhill finds a sense of purpose. Discover the who and the why of the corpse and protect Van Woods' family. Simple enough, until the body disappears from under his nose.

A smallish cast of characters, well-developed and imperfect, each with their flaws and issues.....

Birdie - Van's daughter - young, intolerant of Mayhill, mourning her father, but impatient with her grieving grandmother, protective of Bradley her part time employee and possible friend,

Bradley - impoverished but not bereft of his small ambitions and dreams of something for himself one day, limited choices regarding earning money, poor personal hygiene (blame his mother), an ill-advised cannabis curator-cum-security guard-cum-harvester.

Mayhill - ex-police, a loner, living in disgrace, loves dogs, not averse to kidnapping them if he perceives neglect, poisoned his friend's cannabis crop and lost his job, gonna do his best for his friend's family.

Significant and minor others.......

Van - deceased but casting a long shadow over proceedings,

Birdie's grandmother - withdrawn, depression, mental disintegration or a mask, immersed in a funk with a constant diet of daytime television,

Storekeeper, his cronies, the sheriff, the police despatcher, Bradley's mother, the couple at the dump, employee #2 - name escapes me Jason(?), the buyer, the dogs - loyal and trusting.

A decent rural setting, there's a real sense of place about events.......the distances between neighbours, back trails and woodlands, overgrown, under used and at the mercy of the feral hogs, the hand-drawn maps, the gossipers in the store, everyone thinking they know your business and judgemental about it, not a place where national or international events would ever seem to resonate or have an impact on the lives of the characters. 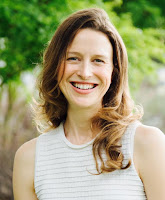 I quite liked how this one unfolded from start to finish; the people we meet along the way, their motivations and the odd bit of scheming from a character or two, the way their ambitions affect other mostly passive participants. I was happy enough with the resolution of the book. There's closure without a particularly happy outcome for all we've become invested in.

Ain't Nobody Nobody is author Heather Harper Ellett's debut. I look forward to what she does next.