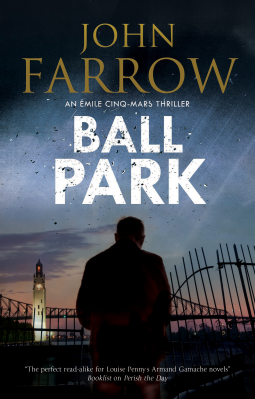 Montreal, 1975. Detective Emile Cinq-Mars is transferring from the Night Patrol - the notoriously tough department of officers in charge of watching over the city as it sleeps - to the day shift. His old superior has seen to it that he's assigned to partner Yves Giroux, another ex-Night Patrol detective some say isn't on the 'up and up'.

Getting in a house is easy for thief Quinn Tanner. The stress comes in getting out clean. On finding her getaway driver dead after her latest heist, she goes underground.

For his first case on the day shift, Emile is sent to the property that Quinn has just visited, and their paths are set to cross. But has she stolen something more valuable than she realizes . . . and who is hunting for her now?

Ball Park is the seventh novel in John Farrow's Emile Cinq-Mars series but my first encounter with the policeman from Montreal. Definitely not my last though after this thoroughly engrossing read.

A cop with a new partner and new boss, a young thief, a burglary gone wrong, a dead getaway driver, a retired safe cracker, a fence with a past, a mob boss, his cheating daughter, her dead husband, a missing baseball with a history and a story to tell, a weed dealer with no name, an alliance of sorts, a hunt, a kidnap, a rescue plan, a mobilisation, a negotiation, a confrontation or two and a helluva lot more.

Ticks in pretty much every box. I liked the setting of the novel in regards to the city of Montreal and the timing - 1975, a year before the Olympics comes to town. There's also the duality of the culture with the mix of French and English, as well as the division of the city neighbourhoods between the haves and the have nots.

Our main character, Emile Cinq-Mars is interesting. No emotional baggage as such, though he's single and thinks about his-ex a fair bit. He's trying to establish himself with a new group of peers, in particular his partner who may or may not be a little bit dirty. He's intelligent and a bit of a risk-taker. We also spend a lot of time with Quinn, the thief who sets a whole chain of events in motion. We probably get more of her back story than Emile's. We get in her head and understand her psyche..... her relationship with her father, her sense of purpose, her rules for stealing, her strategizing, her manipulation of people, the sense of always being on the outside of things, her isolation, her solitariness. The relationship between the two throughout the book is one of the highlights...... initial mistrust, moving onto more solid ground, plenty of humour, possibly a bit of flirting, some earned respect and maybe by the end a kind of friendship.

The plot I could buy into, an event, consequences and a snowball effect which brings into play a disparate bunch of characters with conflicting agendas and resulting in a few casualties along the way. The outcome didn't disappoint either.

Reasonable pace throughout, events happen quickly, things keep moving, but it never seems rushed. Not over long either with my copy weighing in at a bit over 250 pages. I didn't feel as if I was missing a trick by entering the series at this book either. Lots to recommend it and it's definitely a series I will be reading more from, both earlier books and any future ones the author cares to write.

John Farrow is the pseudonym of Canadian author, Trevor Ferguson.