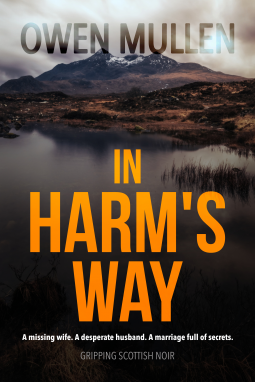 What if someone you loved was in harm’s way?

What if you were being stalked and no one believed you?

What if you were abducted in broad daylight?

What if you were held captive in a cellar?

What if your wife admitted she had a lover?

What if she went out without saying where she was going?

What if you discovered she’d left?

What if a troubled woman disappeared?

What if her brother begged you to help?

What if there was no evidence of a crime?

In Glasgow, DI Andrew Geddes puts the case to the top of his list.

What if this was only the beginning?

In Harm's Way is the author's fifth and latest novel, but only the first of his that I've read. After this outing I'll definitely be backtracking and trying some of his earlier books.

Owen Mullen pitches us into a domestic drama with a savage twist. Mackenzie is married to Derek Crawford. Mackenzie drinks too much and Crawford doesn't like it. Her brother and sister have their concerns but also have their own lives to worry about. Her brother, Gavin and sister-in-law, Monica have a new baby to care for, not that Mackenzie has been too interested or bothered in visiting Alice, her niece. Sister, Adele and husband Gavin seem fairly content with a couple of thirteen year twin boys - both aliens according to their harassed mother.

Adele's birthday party is the trigger point for all that follows. Mackenzie gets drunk again, insults her hosts, rows with Derek and the pair leave. A further fight follows at home and Mackenzie threatens to leave him. And so she does, but not voluntarily.

Abducted and held captive - well she had been saying she was being followed. But she had also been drinking and was notoriously unreliable so no one believed her.

The family viewpoints are differing .... ah, she's walked out and left him. She's got someone else a lover - what a bitch. Derek does everything for her, she doesn't know how lucky she is. You know what she's like......... hmm, Derek's a bit too old for her, he's a bit too controlling. I don't think he's good for her...... Mackenzie - she's left me, she admitted she had a lover.

It's interesting seeing the family dynamics with all the hurts and resentments of the past coming to the surface. Rows, jealousy, rivalries, hurt, pain, memories, mistakes, sympathies and pressure mounting on their own relationships and careers and at the bottom of it all an increasing level of concern for Mackenzie once they realise that if she has left, she's done so without taking any belongings with her.

As a reader we know where Mackenzie is and what happened, but we don't know the why. Her family try to discover both with Gavin eventually involving the police, much to Derek's annoyance.

There's a lot of drama packed into the pages of this not too long a novel. There's the mundane and the humdrum of everyday family lives, but enlivened by the backdrop of an unusual event and the effect is has on those closest to Mackenzie. It brings out both the best and the worst in the family. 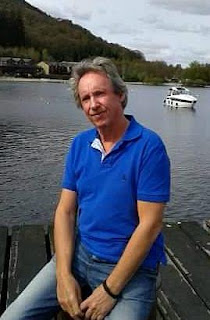 Decent pace, very strong and realised characters, a bit of a puzzle throughout in that only towards the end do we discover the why and the who for Mackenzie's abduction, but an enjoyable puzzle. After that revelation, Mullen also serves up another twist or two before the end. Lots to like.

Owen Mullen's previous books are Games People Play, Old Friends And New Enemies, Before The Devil Knows You're Dead from his PI Charlie Cameron series and And So It Began (Delaney series).