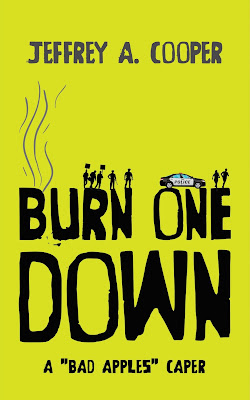 Burn One Down is an enjoyable heist novel where things don't particularly go to plan. Jack Apple's a thief though he has ambitions for settling down into an honest life, running his own business. Start up capital is required and one decent job, taking down a cash-rich medical marijuana shop could offer him his way out. Always assuming Diane, the sexy lady who introduced him to the job, stays out of his way and allows him the latitude to run things. That's something that isn't going to happen. Sharp shooter Diane has her own agenda and way of doing things.

A fledgling partnership, some sex, a plan, a robbery and a payback operation aimed at her ex-husband, the job and a descent into a hostage situation, a thespian security guard, a cranky old couple, an annoyed ex-girlfriend, an under pressure up for re-election Sheriff, a more capable officer with one eye on the job and one on his boss, the annoyed ex-husband and businessman, some shady Mexican partners, a community activist complete with megaphone and bodyguard, a rent-a-mob riot with some opportunist looting and a gaggle of assorted on-the-spot-this-is-live media reporters with flashy smiles and rolling cameras. Author Cooper manages to throw in a few more things besides.

Decent story - a robbery where the wheels come off with the ensuing the fall-out and aftermath. You never quite know how things are going to evolve. Not particularly tense, there's never a sense of real danger for our odd couple of Jack and Diane, as the author executes a lighter touch, playing things for a few laughs. There are several wry chuckles to be had and a couple of laugh out loud moments. Our security guard Reggie, hamming up his Shakespeare for the crowd and the cameras while still being held hostage and the priceless reaction of the press is worth the price of admission on its own. Similarly our Sheriff caught on camera in an unguarded moment is fairly eventful.

Interesting characters, a bit of action, some enjoyable banter and dialogue with our two thieves endeavouring to manage a feisty bunch of hostages, while still working out a few issues in their own developing relationship. Best book ever? No but a solid entertaining read. 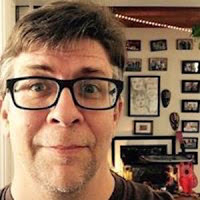 Burn One Down is hopefully the first in a series with career criminal, Jack Apple. The ending of the book certainly leaves scope for further adventures without feeling like there's unresolved issues to tie up.

Burn One Down is Jeffrey A. Cooper's second novel. The interestingly title How to Steal a Truck Full of Nickels - his debut - sits on the pile.