A couple this week from US author Ross Thomas and someone I probably haven't read in about 25 years or so. I think I first discovered in him the late 80s, enjoyed something - can't remember what. I subsequently bought a few books from him, shelved them and moved on. 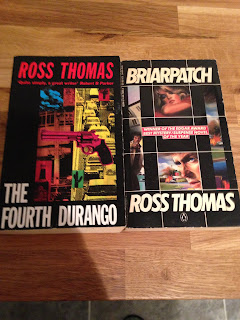 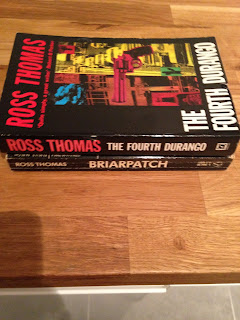 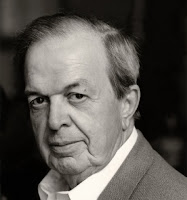 Ross Thomas wrote about twenty-five novels in a career that saw him published from 1966 to 1994 - crime fiction, thrillers and espionage - including three different series characters - Mac McCorkle, Arthur Case Wu and Philip St. Ives under the pseudonym Oliver Bleeck.

In his non-novelist life he was a reporter, a foreign correspondent and a public relations executive in the US, Europe and Africa. He died in 1995.

I suppose after twenty plus years I ought to blow the dust off these and read them! 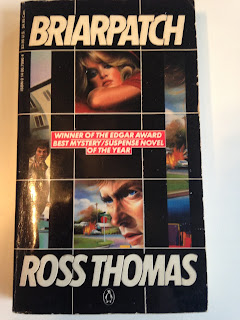 When Detective Felicity Dill is blown to smithereens by a car bomb, her brother, Benjamin, a consultant to a Senate sub-committee, flies to their hometown for her funeral. But Benjamin has two other missions in mind: to find Felicity's murderer and to get a much-needed deposition for his sub-committee.

A lot has changed in the burgeoning Sunbelt city of his youth, and Dill soon uncovers a vicious web of murder and political skullduggery that involves a motley array of friends and enemies from his own past and his sister's mysterious present: Dill's boyhood friend who got rich as an arms dealer in Vietnam; a spaced-out electronics genius: several members of the local police; a very beautiful lawyer; and an ex-CIA spook whom everybody in Washington wants to meet.

Sexy, streetwise, fast-paced and funny, Briarpatch is the novel all Thomas fans - and everyone else - have been waiting for.

"There are very few of our contemporary entertainers as consistently entertaining as Mr Thomas and ever fewer who can match him for style and power...." - The New Yorker 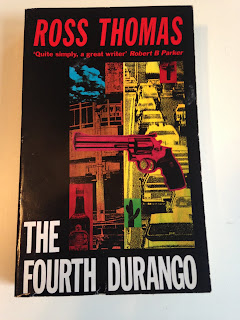 In the God-forsaken city of Durango a man can get lost. In fact, it can be arranged - for a small fee, payable to the Mayor and Chief of Police....

Jack Adair, ex-judge-turned-jailbird, is a man who wants to get lost badly. 400,000 US Dollars badly. That's the money floating around a Panama bank with Jack's name on it after an alleged bribery deal.

Father Teddy - aka the Snout, aka Theodore Cotraire - is a man with a .22 shotgun and a mission, a mission to save Jack. He'd like to fond him badly. 400,000 US Dollars badly.

As the hideously disfigured Teddy drifts around town preaching through the barrels of his gun, the killings start to rise, and a macabre pursuit ensues. But can Jack find Teddy before Teddy finds Jack and the Mayor and Chief of Police find Jack's body....?

"The most knowledgeable, exciting and original writer in hid field" Julian Symons, INDEPENDENT