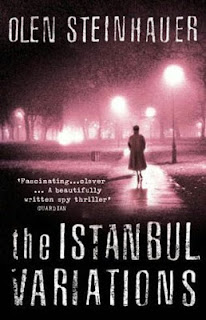 
Stephen Solomita – The Monkey In The Middle


Ian Sansom  - The Case Of The Missing Books


O’Carroll’s Mammy was borrowed from the library after experiencing the hysterically funny Mrs Brown’s Boys on TV - an absolute hoot though I have to say the show is funnier than the book.


Solomita’s Monkey was really enjoyable, another library book this one – and I’d read more from him if time allows.


Book of the month though The Istanbul Variations by Olen Steinahuer


Blurb......... This is a beautifully written new thriller from the acclaimed "Cold War" series writer. 'A welcome addition to the wartime ground mapped out by Philip Kerr and Alan Furst' - "Guardian". Prague, 1968: Peter Husak, a young student, is captured as he tries to flee the country in the wake of Russia's suppression of Czechoslovakia's fledgling freedom movement. Seven years later, a People's Militia homicide investigator with defection on his mind boards a plane for Istanbul. When it is hijacked by Armenian terrorists, the Turkish authorities try to establish contact - but the plane explodes in mid-air. No negotiation, no explanation. Why? Two investigators are assigned to the case: Gavra Noukas, a homicide detective who lives a dangerous double-life, and Brano Sev, an experienced secret policeman loyal to the state. Both believe their superiors are keeping them in the dark, but they can't work out why. As they start unravelling the elaborate mystery, though, a trail emerges - one leading back to a seven-year-old murder, a seemingly insignificant killing with terrifying consequences.