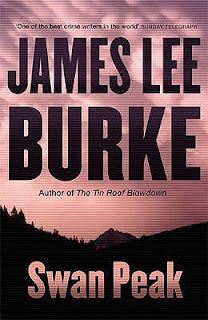 A few spoilers below!


Blurb........Detective Dave Robicheaux returns in another adventure. Only this time, he travels from New Iberia Parish to the wilds of Montana. Swan Peak is the sequel to Black Cherry Blues, the third title in the Robicheaux series. In it, Clete Purcel has to confront ghosts from his past, namely the fact he poured sand in the fuel tanks of an airplane owned by Sally Dio, resulting supposedly in Dio's death. The story also deals with Jimmy Dale Greenwood, an escaped convict who was at one time a fairly famous country singer. His lover is Jamie Sue Wellstone, now the wife of one of the richest men in the West.

The larger story deals with country music, the use of fraudulent ministries to garner support for nefarious political enterprises, and two brothers who are the sons of the most famous wildcatter in Texas oil history. Perhaps the most striking character, however, is an ex-Miami roller derby queen by the name of Candace Sweeney. Her lover is a Texas gunbull who was a guard at Abu Ghraib Prison.

Few authors can tell a story quite like James Lee Burke. He deftly combines intricate, engaging plotlines and original, compelling characters with his uniquely graceful prose. Burke transcends genre yet again in his latest thrilling addition to the Robicheaux series.


I first discovered James Lee Burke in the early 90’s when I came across The Neon Rain, Heaven’s Prisoners and Black Cherry Blues. He absolutely blew me away with the quality of his writing, and his double act of recovering alcoholic Dave Robicheaux and colourful sidekick Clete Purcell.


His full bibliography is as follows;

Since then I’ve fallen in and out of love with the three of them several times in the last 20 years.  Does the quality of the man’s prose outweigh the sheer improbability that after 20 years the self-proclaimed Bobbsey Twins would still be busting heads and taking down the bad guys?


Dave and his constant quest for justice, whilst battling his demons and attempting to keep a reign on Clete has just got tiresome for this reader.  JLB’s books seem to have an underlying narrative that rich people and big business are invariably bad, evil and corrupt, which may be true occasionally, but which after the best part of 30-odd books becomes stale and repetiticious.


In Swan Peak the quality of the writing is as good as ever, with convincingly written flashpoints and lyrical depictions of the Montana countryside.


The downside for me was, after the predictability of the outcome which is fairly inevitable, that the plot was implausible. With over 147,000 square miles of Montana countryside to vacation and fish in, the dynamic duo happen to pitch up in the same neck of the woods as Sally Dio? Unlikely! Vindictive, sociopath Dio gives Purcell a free pass for years until such time as they cross paths? Unbelievable.

Most of the time, I read crime fiction for entertainment, and in truth I was entertained. Most times when following a series with a strong lead character there appears to be a formula to the writing which is often tolerable, but I think I’m done with JLB now though. I think this series has gone on for a few too many books now and though the author is no guiltier of milking this particular cash-cow than many others in the genre, I’m off to pastures new.


This copy was acquired second-hand from Oxfam books in Leighton Buzzard.