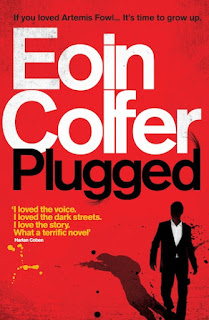 
Scott Frost – Point Of No Return


Tony Hawks – Round Ireland With A Fridge


The first four were books I had previously started and then put to one side, not managing to get into them. Second attempt went ok, I didn’t overly enjoy them but neither did they irritate me........best of this bunch – Scott Frost – I’d read him again.

Pick of the month Colfer’s Plugged. His first adult novel after his YA series Artemis Fowl if you disregard his Hitch-hiker’s thingy. Pretty good.


Blurb..... Daniel McEvoy has a problem. Well, really, he has several, but for this Irish ex-pat bouncer at a seedy, small-time casino the fact that his girlfriend was just murdered in the parking lot is uppermost in his mind.

That is until lots of people around him start dying, and not of natural causes. Suddenly Daniel's got half the New Jersey mob, dirty cops and his man-crazy upstairs neighbor after him and he still doesn't know what's going on. Bullets are flying, everybody's on the take and it all may be more than Daniel's new hair plugs can handle.

And Daniel's got to find the guy who put in those hair plugs--or at least his body--and fast, or else he'll never get that voice out of his head. Head-spinning plot twists, breakneck pacing and some of the best banter this side of Elmore Leonard's Detroit, will keep you on the edge of your seat and itching for more.