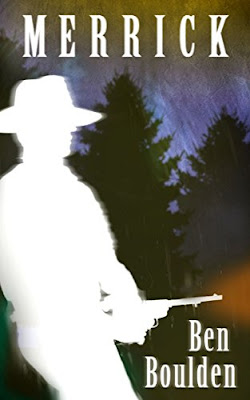 Synopsis/blurb...
Merrick is hard, tough, and when he needs to be, mean as hell.
When Merrick is called in as a late-replacement for a payroll heist his first inclination is greed. His second is hesitation, since anyone who says a job will be easy is a liar, but this job has been planned by an old partner, Clarence Tilley, who has masterminded more than a few successful heists.
It’s a four man job with a payout worth $15,000 and Merrick’s share would keep him in whiskey and satin for a year. But it may also get him killed.
Ben Boulden is the author of BLAZE! RED ROCK RAMPAGE and the forthcoming BLAZE! SPANISH GOLD. Bill Crider, author of the Dan Rhodes novels, wrote that Blaze! Red Rock Rampage has “sharp action and well-observed descriptions” and Western Fiction Review wrote, “Ben Boulden’s descriptive writing puts you right there in the thick of the action.”
Another short novella or long short story whichever way you want to dissect it and another opportunity to try a new-to-me author, Ben Boulden without much of a commitment on my behalf.
Western setting, a stagecoach robbery and the inevitable brown stuff hitting the fan scenario when the job is executed. Double cross or was it triple being the order of the day!
I liked the main character, Merrick even though he lives his life on the wrong side of the law. He does have a certain code of values. Play straight with him and he'll do you likewise. Cross him and there are consequences.
Overall I liked the writing, the setting, the main character and the twists in the tale. My only disappointment is that I can't actually see that the author has written anything else with the same main character.

I think the story also provided another first in that I don't think I've encountered a criminal gang of Mormons before in my reading. Or in real life for that matter.
4 from 5
Read - March, 2022
Published - 2017
Page count - 25
Source - Kindle Unlimited
Format - Kindle
Posted by col2910 at 05:20