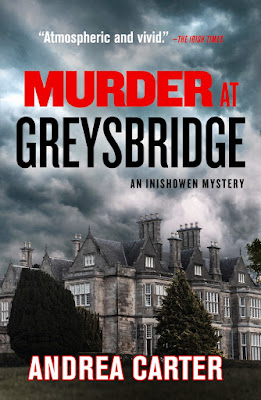 Summer has arrived in Inishowen and solicitor Ben O'Keeffe is greatly tempted by a job offer she's received from a law firm in America.

Yet before making any life-changing decisions there is her friend Leah's wedding to attend at the newly restored Greysbridge Hotel, with its private beach and beautiful pier. It's the perfect location, everyone agrees, but the festivities are brutally cut short when a young American, a visitor also staying at the hotel, drowns in full view of the wedding guests.

And when a second death is discovered the same evening, Ben finds herself embroiled in a real country house murder mystery, where all the guests are suspects . . .

Murder at Greysbridge is the fourth in author Andrea Carter's Ben O'Keeffe and my third time around the block with her. Treacherous Strand and The Well of Ice (#2 and #3) have been enjoyed before.

It's another enjoyable read which picks up after a fairly long and slow set-up. To be honest not much happens in the opening quarter of the book. Ben is toying with taking a new job in the US, some months down the line. Molloy her romantic interest from the previous books is working for the Guards down in Cork and she has a similar kind of relationship with a new doctor in town. On/off/casual/uncommitted etc. And her secretary and employee, Leah is getting married.

At the wedding at a remote country house hotel two guests die in two separate incidents  - one by drowning, one in his bed. Accidental? Natural?  Well it's a mystery/crime fiction book so no. Both need investigating.

Family histories, local stories and legends, a small island nearby that isn't particularly open towards visitors, current family tensions, a visiting American (one of the victims), an English librarian-cum-historian (also dead), a failing business, resentments - new and old,  hormonal teenagers, past mistakes and probably least of all - unless you're the bride or groom  - a ruined wedding.

I quite liked it once it got going. It turns into quite a busy book with some hints as to the motivations for the crime(s). There is a lot of tension in the relationship between the hotel owners and their son. A surly gardener adds to the mix. We also have the islanders coming into the mix as wedding guests, albeit a bit odd and a bit separate from the rest of the party. Ben's doctor friend falls under suspicion after she catches him in a lie and just when she's getting a handle on things, old flame Molloy rocks up to take over the case and throw her off-balance.

Best book ever? No, but I did enjoy it. And I didn't really mind the plodding opening. I'm Irish, so I'm always happy to go visit in my reading and the north of the island and the communities offshore aren't anywhere I'm that familiar with.

The investigation plays out satisfactorily. There's no action or violence as such. Both murders are either off page or low key, insofar as we catch up with as efforts are made to rescue and resuscitate our drowning victim. I liked the thread of family history and secrets which formed a big part of the backdrop to the mystery.

I quite like the main character, Ben. She has a troubled past (don't all main characters?). I like the dynamic between her and Molloy, even if it isn't exactly bombs dropping and rockets firing off, more of a slow burning candle type scenario.

I wouldn't rule out reading more in the series, either the first or fifth or any more the author writes in the future, but I'm not minded to go and round them up.

Source - review copy via Edelweiss - Above the Treeline