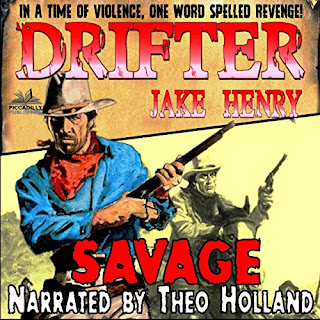 Synopsis/blurb...
In 1864, Captain Jeff Savage was tasked to find Carver's Raiders, a ruthless bunch of killers who blasted a bloody path through the Shenandoah Valley. The mission was a failure and Carver escaped with a handful of men.
Two years later John Carver has raised his head once more when he and his gang of killers robbed a bank in Summerton, Texas, and a bloodbath ensued. During the violent exchange, a young woman is taken captive - Savage's wife, Amy.
When Savage discovered her ravaged body, it set a bloody chain of events in motion.
Eight outlaws escaped the battle in Summerton, and now, armed with the names of those eight, Savage was going to finish what he started. He was going to track each man down and kill him...slowly.
The only question was - would Savage live long enough to finish what he'd started?
A really enjoyable revenge Western which crammed a lot into a relatively short read.
Savage, our main character first crosses paths with ruthless outlaw Carver just after the war. Things don't go well for him, unfortunately. A failure to end things then has consequences for him further down the line.
I enjoyed the backdrop of the civil war and the lingering resentment towards Savage, a Texan returned home after fighting for the Union. Things might have been easier for him if he had bought himself a new pair of pants instead of still wearing his Union duds. The book might not have been quite as interesting had that been the case.
Carver and his raiders rob a bank and take hostages when fleeing. Savage's wife is one of them. She doesn't survive. Savage vows to may them pay.
Plenty of action, plenty of history woven into the narrative, interesting dynamics cropping up throughout the book with Savage working at times with people who don't particularly care for him because of the side he was on in the war. I liked seeing how they got past that animosity and found a level of respect for each other. It was fun also seeing Savage catching up with his prey and watching the scoreboard counting down until it was just the two main adversaries.
I was thoroughly entertained throughout and will have to keep an eye out for further Savage adventures or anything else by author, Jake Henry.