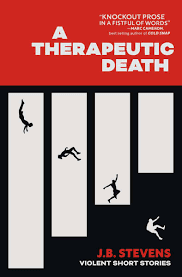 Synopsis/blurb...
Crammed with twisted thrills, dark secrets, and elusive grasps at redemption, this collection of short crime stories will have you turning pages deep into the night.
In the opening story, we encounter two veterans struggling to resolve a problem that a haunting war crime started. Next, we read about a mixed-martial-arts fighter who makes a split-second decision and risks his soul in the process. This is followed by the tale of an assassin who must fight through a cabal of drug dealing circus clowns to keep her young daughter safe. Further in, we learn of two buddies who prove their friend innocent of homicide, despite being stuck in an 80s themed booze cruise. Later, in a true-crime piece, a rookie U.S. Marshal encounters the depravity of man in a dank basement.
These stories, and numerous others, present a series of characters in impossible situations, raging against the never-ending injustices of life. These people try to carve out a piece of happiness, often with disastrous results. The search for salvation brawls against life's harsh reality and the struggle can be overwhelming, but it makes for great reading.
From Dead Camel...
“Radio the Army and let them know what’s going on. Ask not what your country can do for you, ask who you can shoot in the face for your country.”
A Therapeutic Death was another enjoyable short story collection. I've sampled J. B. Stevens work before in the short giveaway - This Will Not End Well.
Here we have over 20 stories, none of them especially long but each with enough depth of character to feel an investment in how things shake out.... war, military service, post-Military life, domestic strife, poor choices, mistakes, infidelity, divorce, untrustworthy friends, the temptation of green, secrets, drug use/abuse, consequences, death. family, violence and sometimes a balancing of the scales.
Contents...
To Keep a Secret — Appalachian Noir
A Well-Lit Path — Crime
The Hostess Stand — Domestic Strife
The Orange Key — Mixed Martial Arts Noir
The Handprint — Revenge
Overpower — Bank Robbery as a Career
The Knowledge — PTSD Noir
A Reliable Belt — Suicidal Noir
The Knife Angel — British Crime
The Hustle — Prostitution as a Career
Maybe I Don’t Want to Be Found  by Waldo of “Where’s Waldo”— Comedic Essay on Hunting Humans
A Red Flash — Police Procedural
The Thunderbird Motel — Private Investigator Noir
The Lake — Addiction Noir
The Missionary — Jail Escape
The Exit — Drug Trafficking Noir
The Mask — Fugitive Hunting/Non-Fiction
Catch — Fugitive Hunting/Non-Fiction
Dead Camel — War
The Palm Grove — War
The Bunker — War/Non-Fiction
The Mortar — War/Non-Fiction
The Georgia Queen — Crime
I think there was just one story/essay that didn't really work out for me - the Waldo one. Otherwise, everything else rocked. I'm hard pushed to select a favourite because they were all hitting the spot. Far easier to highlight the one that was slightly less. Settings, characters - some repeating and straddling more than one story, relationships, dynamics, situations, conflicts and resolutions.
I'll keep an eye out for what he does next.
4.5 from 5
Read - January, 2022
Published - 2022
Page count - 134
Source - review copy from author
Format - PDF read on laptop
Posted by col2910 at 11:22