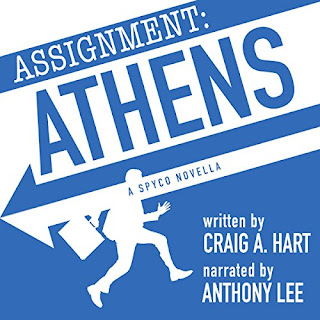 Synopsis/blurb...
When a SpyCo agent is killed on a deserted road during the wee hours, things begin falling apart for SpyCo chief J. Carlton Moore. A briefcase containing classified information disappears, leaving the future of the United States' war on terror in doubt. With the terrorist group Scorpion suspected of possessing the missing briefcase and vital information somehow leaking from the most secure SpyCo meetings, Moore calls on covert operative James Burke. Thrown together into an unlikely team composed of a former flame and a Grecian body-builder, and seeing shadowy pursuers at every turn, Burke must decide whom he can trust and recover the briefcase before it’s too late.
Book One in the new SpyCo Novella Series, Assignment: Athens is a fun romp in the Mediterranean. Infused with wry humor, Assignment: Athens is an enjoyable beginning to the SpyCo novella series.
My fourth time with author Craig A. Hart and the first with his SpyCo series and to be honest it was a bit meh...
It's short which was a plus. The dual settings of the US (can't remember where exactly - either New York or New Jersey maybe) and Athens was ok. The plot/story and the characters were a bit thin.
James Burke is the lead agent, entrusted with recovering a top secret briefcase, along with a fellow agent and previous romantic attachment, as well as a support operative in Greece. Things happen in the US, at the airport and en route to location in Athens that indicate the mission is compromised. Where the leak has stemmed from - nobody knows. Who can be trusted - nobody knows.
We have some subterfuge, some undercover work, attempts on the leads lives, a burglary and a bit of investigating, some action with a night time cliff ascent, a bit of sniper work, and some other encounters with violence and resulting in death and at the end of that some negotiation.
It failed - and this sometimes happens with shorter works - insofar as I didn't really care at any point. There was no real character building or depth. Tension was totally absent and from the blurb if a lighter touch was the aim, there was no real humour evident, apart from the odd witty exchange between the main characters.
Overall a bit disappointing as I quite like his Shelby Alexander series. I have more in the series in the Audible library and I'll give them another go in the future. It wasn't the worst book ever.
Serenity, Serenity Stalked and Serenity Avenged have been enjoyed before.