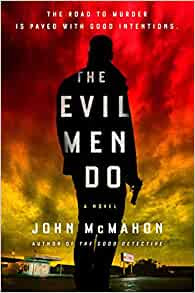 Synopsis/blurb ....
What if the one good thing you did in your life doomed you to die?
A hard-nosed real estate baron is dead, and detectives P.T. Marsh and Remy Morgan learn there's a long list of suspects. Mason Falls, Georgia, may be a small town, but Ennis Fultz had filled it with professional rivals, angry neighbors, and a wronged ex-wife. And when Marsh realizes that this potential murder might be the least of his troubles, he begins to see what happens when ordinary people become capable of evil.
As Marsh and Morgan dig into the case, it becomes clear that Fultz's death was not an isolated case of revenge. It may be part of a dark web of crimes connected to an accident that up-ended Marsh's life a couple years earlier--and that now threatens the life of a young child. Marsh veers dangerously off track as his search for clues becomes personal..and brings him to a place where a man's good deeds turn out to be more dangerous than his worst crimes.
The Evil Men Do is the second (of three so far) in John McMahon's P.T. Marsh series. The Good Detective was enjoyed a month or two back and my latest encounter was just as satisfying as the previous one.
Here we have a murder investigation which has more than a few twists and turns before the conclusion. I suppose this one sits in the sub genre of damaged detective, which can be tiresome but maybe because my staple reading isn't the police procedural added a layer of interest to the story for me.
I like the main character Marsh. Pre-first book he lost his wife and child in an auto-accident which he blamed on his father-in-law. Events subsequent to that have seen a reconciliation with his sole remaining family member and a strong belief that his family were murdered. Here a sub-plot is an attack on his father-in-law who is doing some digging of his own. Maybe there's a touch of coincidence that the same culprit is involved in events here. You know what though, I could buy what author McMahon was selling me and I was happy to go with the flow.
Great murder investigation, nice balance between personal events and the case at the forefront. Interesting dynamics between Marsh and his partner Morgan. While they back and support each other and have a bond, there's still the odd secret between them, which I found realistic. Who shares absolutely everything with a close work partner? I also liked the reconnection between Marsh and his late wife's father. It was refreshing to see them both move past previous misunderstandings.

Fantastic setting, developed characters - both main and supporting. I usually steer clear of books 350 pages plus because my head tells me I could be reading twice as many shorter books. Here my investment in the story and McMahon's ability to keep events ticking along nicely made me forget my usual reservations. I'm looking forward to the third in the series soon - A Good Kill.
4.5 stars from 5
Read - March, 2022
Published - 2020
Page count - 372
Source - review copy via Saichek Publicity
Format - hardback
Posted by col2910 at 05:37