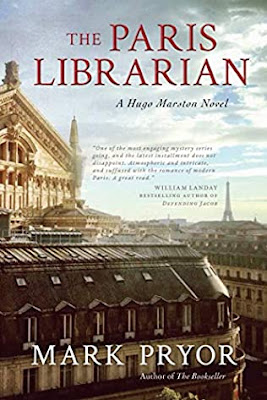 Synopsis/blurb...
Hugo Marston’s friend Paul Rogers dies unexpectedly in a locked room at the American Library in Paris. The police conclude that Rogers died of natural causes, but Hugo is certain mischief is afoot.
As he pokes around the library, Hugo discovers that rumors are swirling around some recently donated letters from American actress Isabelle Severin. The reason: they may indicate that the actress had aided the Resistance in frequent trips to France toward the end of World War II. Even more dramatic is the legend that the Severin collection also contains a dagger, one she used to kill an SS officer in 1944.
Hugo delves deeper into the stacks at the American library and finally realizes that the history of this case isn’t what anyone suspected. But to prove he’s right, Hugo must return to the scene of a decades-old crime.
The Paris Librarian is Mark Pryor's sixth Hugo Marston mystery and the fifth I've read (1,2,3,4 and 9). I've enjoyed them all to a greater or lesser extent. Hopefully I'll get around to finishing the series at some point, I was usually lucky enough to get copies from the publisher when they dropped. I think they missed me out with #8, but I'm not complaining.
The full series in order is as follows:
1. The Bookseller (2012)
2. The Crypt Thief (2013)
3. The Blood Promise (2014)
4. The Button Man (2014)
5. The Reluctant Matador (2015)
6. The Paris Librarian (2016)
7. The Sorbonne Affair (2017)
8. The Book Artist (2019)
9. The French Widow (2020)
Most of the books have a Paris setting, where Marston works at the US embassy as their head of security. Here we have a cast of familiar characters - best friend Tom, on/off (mostly on) girlfriend Claudia and French detective Camille Lerens.
The mystery concerns the death of an American citizen and a friend of Hugo's at the American Library. Hugo discovers the body (of course) and despite the initial thought of natural causes, it soon becomes apparent that it isn't. Hugo works the case in conjunction with Lerens.
There are a few possible motives at play, a love triangle, or a connection to a reclusive, famous resistance fighter, whose papers and belongings are currently causing a bit of a stir. More deaths occur, as the investigation kind of stalls. We have a promising suspect for a while, but no - not him. On we go. In the end we get answers, after a few trips into the French countryside.
I enjoyed the read overall. I think I have learned now that while I may pick out the guilty party when reading, or at least try to; the motive and reasoning behind X killing Y are never really guessable. Well not to me at least. I suppose with hindsight the clues and hints are there, but I don't really attach much significance to them when reading.

One of the things I like about Hugo is his love of books, though I think he might be more of a deep pocketed collector than me. Here he is tempted to pay $3k for a signed 1st edition of In Cold Blood by Truman Capote. I think my copy cost me 3 quid. His character also gives a blatant hat-tip to a couple of fellow Seventh Street Publishing writers here, as he reads James W. Ziskin and Terry Shames mysteries. I'm a fan of both their series myself, so you can't argue with his taste in mystery fiction.
3.5 from 5
Read - April, 2022
Published - 2016
Page count - 272
Source - copy from publisher Seventh Street Books
Format - paperback
Posted by col2910 at 11:49