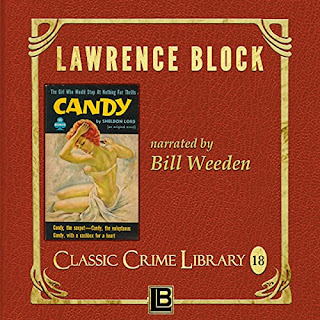 Synopsis/blurb...
Jeff Flanders has a perfectly good life. Until Candace Cain sashays into it, and turns it upside-down. Jeff’s got a good-looking wife; he loves her, and she loves him. He’s got a job, swinging a desk at a semi-shady finance company, signing off on usurious loans to losers; he doesn’t love it and it doesn’t love him, but it’s easy work and it pays the bills. Until a girl called Candy applies for a $1000 loan - with no job, no bank account, no security.
Nothing but a beautiful face, an awesome body, and all the nerve in the world. He lends her the money himself. That’s a mistake. In return, she takes him to bed. That’s a bigger one. All she wants in the world is someone who’ll keep her in style. All he wants is more Candy....
Candy, first published in 1960, is a noir novel of sexual obsession. An early entry in the Collection of Classic Erotica, LB decided it would be more at home in the Classic Crime Library. And we still get to use the gorgeous Paul Rader cover.
Another enjoyable early Lawrence Block outing. I wonder if I'll ever catch up with his entire back catalogue? Probably not, but it won't be for the want of trying. I think if I was restricted to reading only one author's books for the rest of my life, Block's my man.
Candy is a femme fatale and bad news for Jeff Flanders. As soon as the two cross paths, Flanders' brain heads south to his skiddies and from then on he's pretty much doomed. You just know things aren't going to end well. Following their descent to mutual destruction is great fun though.
Candy is a handful. Physically, she's nearly everyman's dream. Emotionally, maybe not. She's driven and very single-minded. She knows exactly what she wants from life - luxury and to be kept. She's happy to use her ample attributes to help her get it. And it doesn't matter too much which way she has to swing to get it.
Jeff Flanders never really stood a chance.
Entertaining, funny, and in one particular scene, pretty brutal as madness takes over.
Great characters, great dynamics, an interesting set-up and story, with an outcome that pretty much seemed pre-ordained but was nevertheless executed perfectly.
4 from 5

Lawrence Block has been enjoyed more times than I care to mention. Fortunately I'm probably not even halfway through his tremendous output. The good times will be rolling for a while yet.
Read - (listened to) January, 2022
Published - 1960
Page count - 190 (3 hrs 16 mins)
Source - Audible purchase
Format - Audible
Posted by col2910 at 05:33