Author Bryony Pearce was kind enough to share some thoughts on part of the writing process for her latest book, Little Rumours 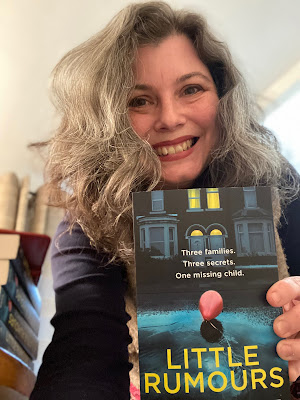 Creating a place – the location of the crime

My new thriller, Little Rumours, is about the search for an eleven-year-old girl who vanishes from the local park one evening after school. The last people to see her are her friends. But the children have secrets and so do their mothers and soon rumours and lies will tear this community apart.

When I was coming up with setting for Little Rumours, I wanted a place where everyone knows, and gossips about, everyone else. I wanted that sense of claustrophobia, of knowing that whatever you do, and wherever you go, someone is watching, someone knows and if one person knows, soon everyone will.

I wanted a sense that the setting is not just a setting, but a centre of gravity around which the story will take place and from which the characters cannot depart, no matter what they do.

I wanted there to be a sense of community, but the kind of community that excludes outsiders. That is close-knit, but only towards those who are born into it.

It had to be a rural English village.

I started by thinking about what was needed in the village in order for my story to take place: a primary school, a children’s park, a church, streets and houses.

I thought about what my characters would need in order to live in this village: the local newsagents, a butcher, a Co-op, a pub, a café.

Then I thought about what kinds of things would give this village a sense of history and community:  the graveyard, war memorial, the community centre.

Then I thought about atmosphere. I wanted to make this village feel inescapable. The graveyard shows that people will live here, die here and never leave; in the story Naomi is as trapped by her devotion to the dead as she is by her closeness with the living. I surrounded it with woodland, an impenetrable barrier, especially in the dark, that has to be searched, I put in a steep hill, covered in brambles that cannot be climbed. I added a fast-moving river and a babbling stream, physical boundaries that are also constantly chattering in the background, a reminder of the gossip that is so much a part of everyday life.

I made the village chocolate box pretty, but with a dark underbelly.

I gave each of the three characters very different homes, which reflect who they are. Naomi, the local mother who is a central part of the community, gets to live in the Old Vicarage, a beautiful, but huge and empty property which reminds us of her history in the village, but the emptiness of her life. Aleema an incomer, married to a local, gets to live in a modern terraced house, which reflects her modern outlook but also her desire to become a part of the community. The real incomer, the outsider, Kelly, rents an increasingly dilapidated cottage on the outskirts of the town, with an old well in the neglected garden, which reflects the depth of the secrets which are tearing her apart.

The book does not contain the map, it exists here, scribbled on a piece of cardboard, in a picture on my computer and in my mind. It is however, very real, to me and hopefully, once you’ve read the novel it will be real to you, too.

Here is Exton Cross. I hope you enjoy your visit … 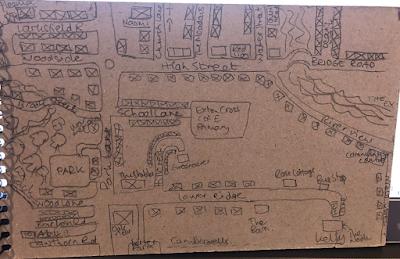 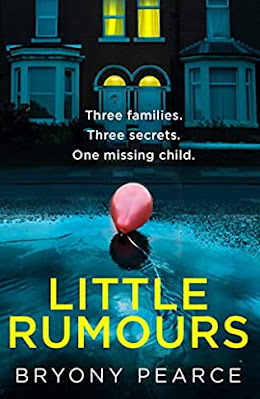 ‘WARNING: do not start reading this if you have things to do. It’s a page-turner you won’t be able to stop thinking about.’ NetGalley Reviewer
It started with a rumour. But rumours can be deadly…
In a small town, three mothers wave goodbye to their children at the school gates.
Naomi has lived in Exton Cross since she was born, and she knows everything there is to know about everyone.
Aleema hates it here. It’s been three years and she’s yet to make a single friend. And she’s sure the other mums whisper about her behind her back.
Kelly is an outsider. New to the town, she arrives with nothing but her son – and a dark secret.
By the end of the school day, one of their children will be missing. And rumours will swirl that one of them knows why…
Secrets and lies will come to light with devastating consequences in this dark and twisty psychological thriller, perfect for fans of Big Little Lies and Adele Parks.
Little Rumours dropped just the other day.
Many thanks to Bryony Pearce for popping by.