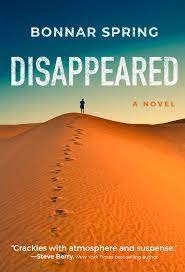 Synopsis/blurb...
These two sisters are about to be permanently "disappeared"
Julie Welch's sister, Fay Lariviere, disappears from their hotel in Morocco. Although she leaves a note that she'll be back in two days, Fay doesn't return.
Julie's anger shifts to worry—and to fear when she discovers a stalker. Then, an attack meant for Julie kills another woman. Searching Fay's luggage and quizzing the hotel staff, Julie discovers Fay's destination—a remote village in the Saharan desert. Convinced her sister is in danger and propelled by her own jeopardy, Julie rushes to warn Fay.
By the time she reaches the village, Julie finds that Fay has traveled deeper into the desert. With a villager as guide, Julie follows—only to be stranded in the Sahara when the guide abandons her. Julie is eventually reunited with Fay—in a prison cell—and learns the reasons for Fay's secrecy.
Although furious at Fay's deception and weak from her desert ordeal, Julie knows they must work together. The sisters, ensnared in a web of dangerous lies and about to be permanently "disappeared", pit their wits against soldiers and desert in a fight for their lives.
Perfect for fans of Tana French and Martin Cruz Smith
Disappeared was an enjoyable, tense read. Two American women, sisters - Fay and Julie - go to Morocco, purportedly on their yearly holiday/catch up. One is harbouring secrets from the other and for her it is a lot more than just a vacation. Before you know it both are in jeopardy.
Sisters, a strange land, secrets, encounters with the police, unwelcome attention, a disappearance, concern, resentment. tension, danger, a narrow escape, lost family, political enemies, encounters with the military, imprisonment, a re-union, answers and forgiveness, ill-health, medical concerns, escape, flight, betrayal, and more before our outcome.
I enjoyed the Moroccan setting and the local flavour of the novel. The author certainly seems to know the country and there's a real sense of place in the narrative..... the weather, the terrain, the food, the dress sense and customs, the celebrations and religious holidays, and the people we encounter through the course of the book.
There's an initial curiosity as to why Fay has disappeared and Julie's initial annoyance transforms into worry and then action, despite the sense of isolation and bewilderment she is feeling. Julie is never quite sure who can be trusted in her quest to find Fay. Any interaction with a local, apart from a shared meal and some hospitality from a Moroccan family before her concerns over Fay set in, are viewed through a lens of suspicion and apprehension. All transactions are cautious and tentative and this adds a layer of tension to the book. The indifference of the local on the ground US authorities to Fay's nysterious absence adds to Julie's woes.
Eventually we get to understand the reasons for Fay's secrecy and her actions. Her second husband, Gil - a bit of a mystery man to Julie anyway - has received news of his estranged family in Morocco; Yasmin, his mother and Nadia, his sister have smuggled a message out to him in the US, after many years of him fearing them dead.
From then on it's sisters reunited, along with some additional 'baggage' in the form of extended family. Two in jeopardy becomes five. There are some daunting obstacles still to overcome before they can truly consider themselves and Gil's family, including a young nephew, Hamid safe.
I really enjoyed the story. It was interesting to get a glimpse into a culture and society where personal freedoms are more limited than the liberties I enjoy and take for granted. There's a real kind of east meets west vibe to the book. (And yes I know Morocco is in North Africa.)
Overall an exciting mystery/thriller. There's a decent pace, well drawn characters with depth and tension in their relationships and a satisfying ending.