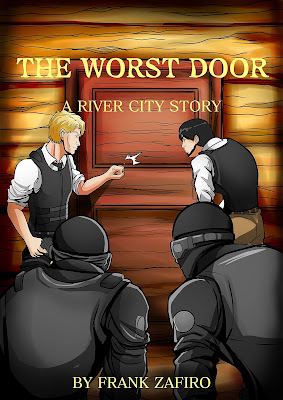 Synopsis/blurb....
River City police detective Joseph Finch has seen a lot in his years as a homicde detective. He's investigated cases and arrested suspects. He's gone through a lot of doors. But the next one will be the hardest one of his career.
He has no choice. It's his duty. He has to take this door.
He must face what is on the other side.
It isn't what you think it is.
But for Finch, it will be the the worst door, ever.
This short graphic novel is part of the River City universe, and is based on the Derringer Award finalist short story of the same name.
I was scratching around for a quick read to finish off the month of April and happened upon this short offering from favourite author, Frank Zafiro. I've only flitted into his River City universe on the odd occasion in the past, though I do intend to read the ten or so novels and the several short story collections that are set here.
The Worst Door was - unknown to me until I opened it - in graphic story format. It's not a format I read in too often and is probably one I will continue to steer clear of in future if this experience is anything to go by.
My eyes, my eyes, my eyes .... I just had problems reading the block text accompanying the images and the images on their own only tell you some of the story.  Even blowing up the story to full screen format on my laptop Kindle reader didn't help that much. I think I got the gist of it in the end, but it was an effort. If it was a full length novel, I think either my eyes would have bled by the end or my head would have exploded.
Apart from that, everything was perfect! 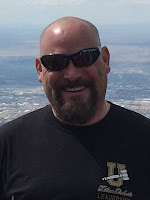 It's a short story concerning family - two brothers namely and two different paths chosen after a difficult upbringing. I think I need to read the original story in its original format, especially as it was an award finalist. There are some complex emotions in play as one brother confronts the other in their childhood home. Me struggling to read their lines of communication obviously impacted negatively on how well I received the story. It's impact was severely diminished. More of a thank goodness I've reached the end, as opposed to some thoughtful contemplation.
3 from 5
Read - April, 2022
Published - 2021
Page count - 11
Source - Kindle Unlimited
Format - Kindle
Posted by col2910 at 05:45