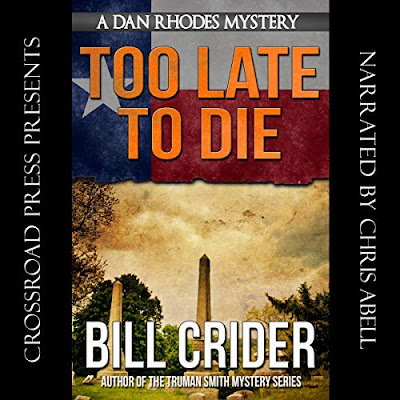 Synopsis/blurb....
Everyone knew her. A lot of them like her. One of them killed her.
Jeanne Clinton was a pretty and well-liked woman—though in her younger days she'd been known to be a bit wild. But she married an older man and settled down to a quiet, respectable life. Now she is dead, brutally murdered in her home.
Dan Rhodes, the thoughtful, hard-working sheriff of Blacklin County, Texas, has enough to worry about already: a rash of burglaries in town and an election coming up against a hot-shot opponent. Now he's got to find a killer among the residents of his little town—a wily killer, bound and determined not to be caught.
The deeper Rhodes digs into the hearts and minds of his neighbors, the more secrets he turned up...and the more violence he encounters. But Rhodes doesn't give up easily. And neither does the killer.
Too Late to Die is the first title in the late Bill Crider's long-running Dan Rhodes series (25 books total). Somewhat bizarrely despite having the first three in my Audible library I came at them ass-backwards - three, then two, then one. (Funny enough the world still revolved on it's axis and the sun still rose in the East and set in the West, despite my OCD triggered concerns.)
Here we have a small town Texan murder mystery, with a likable main character sheriff and a decent support act behind him in the sheriff's office - Lawton and Hack Jensen, both of whom have honed a well-rehearsed comedy act, always at Dan Rhodes expense. Rhodes is fairly recently widowed and lives with his adult daughter, Kathy.
This series opener is quite a busy book, as Rhodes deals with murder, burglary, vagrancy and a jail break, as well as a complaint against an over-zealous deputy, one who happens to be dating Rhodes' daughter; all while juggling a re-election bid and getting back in the dating game with an attractive widow, Ivy Daniels while avoiding the attentions of another likely suitor, Mrs Wilkie.
I really enjoyed this one. There's plenty of humour especially around the sheriff's office and jail. The main character is intelligent, competent and honest and despite his age (mid-50s at a guess - I could be wrong) gets in more than enough rough and tumble with suspects and arrestees for a man half his age. Unlike a superman, he doesn't always get the best of these encounters, which adds a welcome dose of realism to the book.
Interesting storyline, enough little offshoots and tangents and personal details to flesh out the story without ever distracting or feeling like unnecessary filler. Bill Crider really was a skilled story teller. I hope to enjoy more from the series than just the first three books, but we'll see whether time allows.
4 from 5
Other Crider books have been enjoyed in the past.
Outrage at Blanco, Piano Man, Blood Dreams (as Jack MacLane), Gator Kill, Dead on the Island and A Time for Hanging.
Bill Crider sadly passed in 2018. 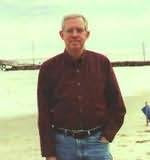