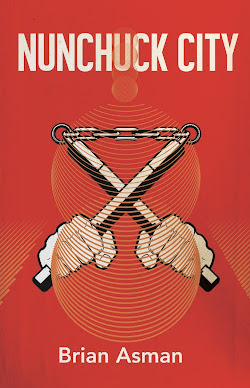 Synopsis/blurb...
You better nun-check yourself before you wreck yourself!
Disgraced ex-ninja Nunchuck “Nick” Nikolopoulis just wants to open a drive-thru fondue restaurant with his best friend Rondell. But when an old enemy kidnaps the mayor, and a former flame arrives in hot pursuit, Nick’s going to have to dust off his fighting skills and face his past. Plus an army of heavily-armed ninjas, a very well-dressed street gang, an Australian sumo wrestler with a gnarly skin condition, giant robots, municipal paperwork, and much, much more! From the rooftops to the sewers, Nick and his ex-girlfriend Kanna Kikuchi are in for the fight of their lives!
Also featuring the backup story “Curse of the Ninja” by Lucas Mangum!
Nunchuck City is a comedy/farce crime/thriller novel written by an author who obviously doesn't take himself or his characters too seriously. Or at the very least, he lets himself have a good time writing. It's my first time trying author Brian Asman's work and I do wonder if his other books are of a similar ilk.
Our tale as such concerns a city takeover by a bunch of bad ninjas as a prelude to more grandiose and expansive plans. Hero, Nick Nikolopoulis just wants to open a restaurant and with his dream now in jeopardy, reluctantly takes up his retired nunchucks and teams up with old flame Kanna to rescue the kidnapped mayor and restore order to Turbo City.
Battles, fights, decapitations, cheese fondue, ninja death stars, ass kickings, trips through sewers and robotic flights and more ensue.
Personally, I can't fight. I never could. Let alone with weapons of a martial arts persuasion, some of which I've never even heard of (nunchucks excepted). I think even if I could and had awesome skills, I might draw the line at tackling a sumo wrestling giant, particularly one with a bulging colostomy bag in tow. The s*** hits the fan literally. 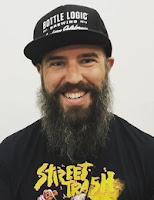 Action, violence, humour, craziness and a bit of a love story to boot, populated by madcap characters. There's definitely a good vs evil vibe coming off here, but it's all presented in a tongue in cheek fashion. Fun was had.
4 from 5
Read - May, 2022
Published - 2021
Page count - 218
Source - review copy from a respected book publicist
Source - Kindle
Posted by col2910 at 03:11