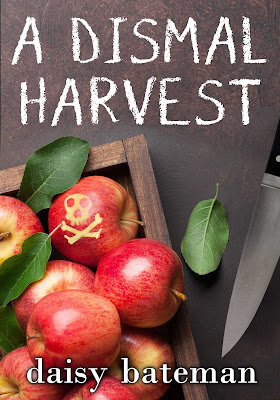 Synopsis/blurb...
Autumn on the Sonoma Coast. A welcome chill is whipping through the crisp Pacific air, but something else is stirring in this rural California town…
Witty and down-to-earth Claudia Simcoe is sure that the gourmet harvest dinner being held at her artisan marketplace will wipe away any memories of the unpleasantness last summer. Not to mention give her a chance to figure out the bewildering relationship budding with her craft-beer-brewing neighbor, Nathan. But rather than dealing with carefully curated food and cautious flirting, Claudia finds herself thrown into the center of a murder investigation when a secret compartment in her market is tied to the death of a local lawyer.
At least this time she isn’t the prime suspect. Instead, it’s one of Claudia’s marketplace tenants who is wanted by the police: the locally-famed cheesemaker, Julie Muller. Determined to help clear her friend’s name—and to discover the history connecting her market to the murder victim—Claudia is forced to test her mettle as a detective once more. As she starts digging into San Elmo’s long-buried past, she is confronted with Prohibition-era mysteries, shady land deals, and a small town bursting with motives to kill the crooked lawyer. But just as she thinks she’s getting a handle on this investigating thing, another gruesome death brings Claudia dangerously close to the killer.
The second installment in Daisy Bateman’s Marketplace series delivers cozy mystery and charming humor as Claudia works to uncover the truth about the murders, her marketplace, and her feelings for her ruggedly attractive neighbor.
Another new-to-me author in Daisy Bateman and a slightly lighter mystery than those I usually read. We have the murder of an unlikable, dodgy lawyer with our main character, Claudia Simcoe doing a bit of amateur sleuthing to try and get prime suspect and friend, Julie Muller off the hook.
California setting, a backdrop of food, home brewing and a local marketplace, a small town community, a dead lawyer who has seemingly stitched up half the county with some shady dealings and some amateur sleuthing to get to the bottom of things. Interspersed in the investigation we have a tentative romance with a neighbour, some humour (not all of which hit the mark) and some local history regarding agriculture and prohibition time whiskey making. There are also a few references to the case covered in the first book in the series, but nothing to annoy me of make me feel as if I had missed a trick by missing Murder Goes to Market.
Most of Claudia's sleuthing seemed to involve gentle questioning with neighbours, friends and acquaintances while consuming delicious home cooked or home baked foods. We also have a low-speed tractor chase at the climax of the book.
Best book ever? No, not really but I was engaged and enjoyed it for the better part, while never exactly in shock or awe at any of the writing or turn of events. It did exactly what is was supposed to do - entertained and intrigued at the same time as I was curious to discover the identity of the guilty party.