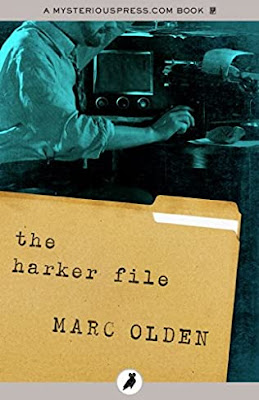 Synopsis/blurb....
Chasing a scoop on the CIA, a reporter finds his own name on the hit list.
In Madison, Wisconsin, a dairy farmer drops dead of a heart attack. A few days later, a small-town citizen in Iowa is killed in a three-car pile-up. Few men know the connection between these deaths, and only one is willing to talk to Harker, an investigative reporter with sources on the inside of every agency in Washington. His source at the CIA is named Trotman, and he knows things that men cannot discuss in the light of day. The two dead men were CIA agents, defectors from Communist states living under assumed names. Trotman tells Harker not out of civic duty, but because the reporter will be one of the next to die.
Getting the story of this terrifying conspiracy down in print is Harker's only chance for survival. He must work quickly to stay alive, but that's no problem. Reporters like Harker love deadlines.
Author Marc Olden wrote about forty books in his career, including several popular series including Narc, Black Samurai and Harker Files. Some members on one of my Facebook Book groups have been extolling his virtues, so I thought I'd give him a go. Narc has been read and enjoyed and so I thought I'd try one of his other shorter series as well.
The Harker File is the first in a four book series featuring an investigative reporter. We have a series of suspicious deaths, a conspiracy and Harker, our main man trying to uncover the in and outs of it all, while trying to stay alive.
CIA types, black ops, the death of a president, a cover up, Cuban shenanigans, Washington insiders, secrets, an all powerful cabel, deaths - multiple, leaked information, highway ambushes, hit squads, politicians, military men, rumours, persistence, missing reports, newspaper types, undercover investigating, career, a failed marriage, jeopardy, pressure, betrayal and a lot more besides.
I am a fan of a conspiracy thriller and this is a good one. I liked the 70s setting and the story is all too believable. Government types doing what they want to who they want and powerful enough to crush anyone or anything that gets in their way. And we have the one man against the machine, though in this case he does have some allies.
Fast moving with a few different US settings, as the story takes Harker around the country - Washington and Florida for sure and somewhere else for sure, Vegas or Arizona maybe? I forget. The multiple locations and the zipping from here to there to find the next piece in the invetigative jigsaw adds to the tension. I really liked this one. There's probably a slight suspension of disbelief required to accept that in the end, Harker survives to appear in the second book of the series, but hey hoh all fiction needs that reader buy in.