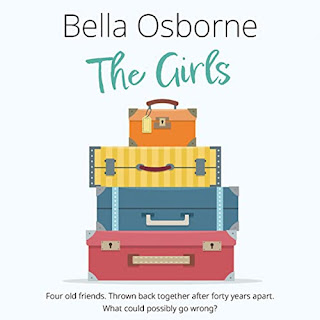 Synopsis/blurb...
Four old friends. Thrown back together after forty years apart. What could possibly go wrong?
In the 1970s, The Girls were best friends sharing a house and good times: Zara the famous diva actor, Val the uptight solicitor, Jackie the wild child and Pauline the quirky introvert. Now they're in their twilight years, and Zara suggests that they live with her to support each other through old age.
Initially, being housemates again is just as much fun as in their heyday. But then Zara reveals the real reason she asked them to move in with her, and suddenly things take a sinister turn.
As the women confront their demons they come under the spotlight of the press, the police and an angry parrot. With their lives spiralling out of control can they save their friendships and each other?
A bit of a change of reading pace with this one badged as general fiction/romance. I don't think I really got any romantic vibes from it (though Jackie one of our characters does seem to be on a permanent manhunt, maybe looking for love, but essentially seeking a provider). There was more than a smidgeon of mystery concerning the motivations of Zara Cliff regarding her girls. Why had she manipulated and reunited them?
I think I probably enjoyed this a bit more than I expected to. We have four main characters. Queen Bee is Zara, a famous actress and celebrity. Her girls are all slightly younger than her, but don't remind her of that! There's Val, a single, retired solicitor; Pauline, a widow and someone very alone and not in a great place mentally; and Jackie, a larger than life care provider.
In the 70s they shared a house in London for a period of time. Life moved on and they all drifted apart and went their separate ways. After an invite to Zara's surprise 80th Birthday Party and a brief reunion, Zara suggests that they all come and live with her instead of seeing out their days on their own. Zara has an ulterior motive which becomes clearer the further into the book we go.
We get the girl's individual histories and come to understand their characters, their weaknesses and strengths, their secrets and their moral boundaries. We learn of their shared history and as well as reminiscing over their good times together, the jealousies and arguments are revealed, as well as the teeny tiny slightest bit of bitterness that remains between a couple of our cast.
From a very personal POV, I think I find the thought of reconnecting with friends from 40 years ago quite awful. I can't actually think of many things worse. Maybe it's a man thing? Maybe I'm generalising. It was interesting to see how quickly they picked up and re-established the bonds between them all.
Zara is still the shot caller and alpha female, though at various times individually and collectively the others do stand up to her. It's a very unequal relationship though (most friendships are). It's distorted by money which equates to power. Zara does use this to exert control over the options her friends have, and although there is an benefit for each of them as a result of her actions, it's a stretch to consider her totally benevolent or altruistic. It's more transactional.
Another plus point in quite a humorous story was the dual settings of London and France, and the celebrity name dropping, in particular neighbour Felicity. Zara's chagrin at being pipped by her to a Rear of the Year title many years ago hasn't dimmed with the passage of time.
Before the end of the book we have a run-in or two with the French police, as well as some crossed wires and suspicion between our friends. Things work out for them all in the end.
Overall a fun read interspersed with some sadness as well. A bit of a reflection of life really.
Enjoyable narration as well from the talented Julia Franklin.