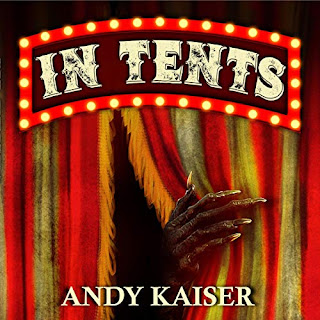 Synopsis/blurb...
Dario may not have his life figured out, but at least he has a job, a cell phone, and friends who care about him. That’s enough, until the circus comes to town. Soon after, a bloody attack puts his friend in the hospital and Dario begins to hunt for whoever is responsible.
As he investigates, Dario is pulled toward the dangerous and violent circus, its strange people, and the dark rumors of “Frank’s Show”. But the more he unravels the mystery, the more he realizes he must escape it all… before it kills him.
A bit of a blind punt taken on this one and I'm happy to say it paid off on this occasion.
Strange and weird and funny with splashes of horror and mystery all mashed up and blended together. I've not read Ray Bradbury's work for years, but was reminded of Something Wicked This Way Comes as here we have a battle of good vs evil.
Main character Dario is working at Weeko's Cave, a Native American tourist attraction, role-playing historical scenes for the tourists and struggling to get by. One day Mad Moon's Shining Circus comes to town and Dario is drawn towards it.
Dottie, his female colleague/friend at the cave job gets attacked outside the circus grounds and ends up in hospital and Dario wants to find the culprit and teach him a lesson. This gives him a reason to revisit often.
He gets close to the owner, various barkers, stall holders and other connected people and strange things happen. The circus has secrets, some of which are shared with Dario. The circus also protects it's own and Dario also finds himself a target.
Some of the scenes in the book are absolute comedy gold. The ripped top at the cave and the fight with the tourists, for one and in Gold Medal position - the discovery of Dario and the alligator woman naked in the cave by a granny and her family. Photos available on the Internet apparently!
There's some real tension in the book in places. Dario tries to win an Apache pipe for his friend, Weeko at a sideshow. Kaiser really held me rapt as Dario used his skills with a bow to try and overcome some mysterious forces opposing him. There's also some frights in the book, especially when Dario is pursued by malevolents intent on causing him harm.
Some elements were inexplicable/unexplainable/logic defying but it was one of those stories that the supernatural/other worldly elements added to my enjoyment, as opposed to detracted from it.

There's a lot in the book about family, friendship, support, looking out for each other and loyalty. Dario endures a few trials and tribulations. He gets sacked and nearly sacked more than once in the book, and suffers some physical loss but things turn out pretty well in the end.
4 from 5
Read - (listened to) May, 2022
Published - 2019
Page count - 199 (4 hrs 49 mins)
Source - Audible purchase
Format - Audible
Posted by col2910 at 03:07