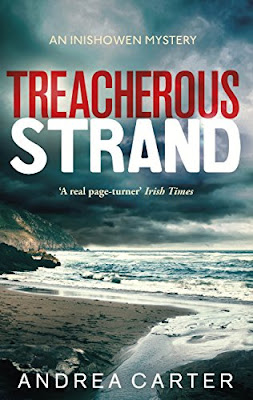 A woman's body washes up on a remote beach on the Inishowen peninsula. Partially clothed, with a strange tattoo on her thigh, she is identified as Marguerite Etienne, a French woman who has been living in the area.

Solicitor Benedicta 'Ben' O'Keeffe is consumed by guilt; Marguerite was her client, and for the second time in her life Ben has failed someone who needed her, with tragic consequences. So when local sergeant Tom Molloy dismisses Marguerite's death as the suicide of a disturbed and lonely woman, Ben cannot let it lie.

Ben uncovers Marguerite's strange past as a member of a French doomsday cult; she escaped 20 years previously, but not without leaving her baby daughter behind.

Disturbed by what appears to be chilling local indifference to Marguerite's death, Ben pieces together the last few weeks of the French woman's life in Inishowen. What she discovers causes her to question the fragile nature of her own position in the area, and she finds herself crossing boundaries both personal and professional to unearth local secrets long buried.

Busy times, both work and life so I'm lagging a bit behind on my blogging, I'm kind of struggling to recall too much about this one which was read in the early part of February. I suppose that in itself tells a tale - a book I enjoyed but one which wasn't particularly memorable.

A French woman who had been living locally - here a remote coastal part of Ireland, turns up dead in a suspected suicide or drowning. Our main character, a nosy solicitor - Ben O'Keefe - who had just been engaged by the dead woman to represent her, feels she has failed her and starts digging.

Small community with secrets, a rushed funeral, an indifferent daughter, a strange religious cult, a romance - on-off-stalled, jealousy, an unofficial investigation of sorts - more sort of blundering around asking people questions, a few suspicious characters, family histories, a trip to Scandinavia, the shadow of events from book one in the series, some danger to our main character throughout the book and eventually answers and a resolution.

Nothing that annoyed me or bumped me out of the book. I liked the setting of the Inishowen peninsula - it's remoteness and the small community. The main character was a bit annoying but not overly so. When she was in jeopardy I was an onlooking rubbernecker, I wasn't breaking out in a cold sweat fearing for her safety, but I was interested to see what happened next. There's a few twists and turns as the book unfolds, you find yourself suspicious of a few individuals in turn. The resolution was cohesive, set against all that had come before.

Overall, a decent read, but one that doesn't have me rushing to find the earlier book in the series, nor the next one by the author.

Read - February, 2020
Published - 2016
Page count - 320
Source - originally an Edelweiss book courtesy of Oceanview Publishing who have brought this one back into print. A computer death meant I had to buy a copy to finish
Format - 50% ePUB read on laptop, 50% paperback