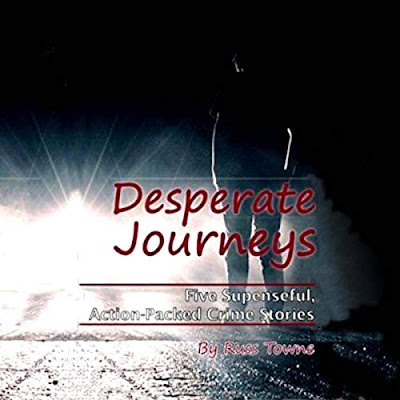 Synopsis/blurb ....
Desperate Journeys by Russ Towne takes readers on a thrill ride with five gripping stories of suspense where ordinary people face impossibly long odds, conquer fear, and find the strength to survive horrifying circumstances.
Desperate Journey
It’s everyone’s worst highway nightmare. A breakdown on the road to the “happiest place on Earth” leads to a night of terror for one teenage boy.
No Choice at All
A road trip for an interview with the boss turns into a night of lethal danger and desperate courage when a man stops to give roadside assistance.
The Blood Oath
A mother’s secret, a lost identity, and a father’s decision bring peril to a man who learns who he is and what he’s made of in trying to save a young woman.
The Misunderstanding
A luggage mix-up focuses a violent criminal’s attention upon a mild-mannered man and his family.
The Patsy
A swindler with violent tendencies discovers elderly widows can be dangerous, too.
An enjoyable audible listen with 5 different stories, each one involving people in jeopardy. Looking back a few weeks on only four of them stick in my mind, but that's not a bad overall percentage and is a decent testimony to the author's storytelling skills.
I liked them all (or at least four of them for sure).
Desperate Journey features a family on a road trip when inevitably they breakdown. Two adult females, some young kids and a teenage boy. An artic and two men stop offering assistance - ie a ride up the road to the next town. The teenage boy reluctantly goes with them. Bad move, but it's a kind of Hobson's Choice situation. A boy can do a lot of growing up in one night.
No Choice at All is similar to the opening tale, insofar as it starts on a lonely isolated road. A man in a hurry turns around when disturbed by an incident he has seen at the side or the road. Two men, two women, an altercation. An interesting way to meet your future wife.
The Blood Oath .... memory fails me.
The Misunderstanding features a luggage mix-up where a family man rubs up against a violent threatening criminal after collecting the wrong bag. It helps to have a decent support network of friends.
The Patsy features a con-man trying to hustle the wrong woman. Justice is served.
Interesting tales, well-written and each one was long enough to feel an investment in the characters and the outcome. If I was being picky, I would have liked one, possibly two to have had different outcomes. Not everything in life has a happy ever after ending. But maybe that's why it's important that fiction, with the escape into other people's worlds and away from our own problems does. I dunno.
Three and a bit hours well spent. 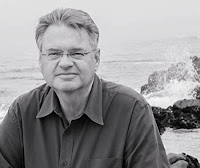