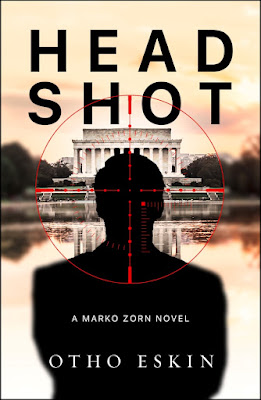 Synopsis/blurb ....
The Most Elusive Assassin in the World Versus D.C. Homicide Detective Marko Zorn
Washington, D.C. homicide detective Marko Zorn is investigating the murder of an actress—an old love—when he is assigned to protect the visiting prime minister of Montenegro, the beautiful Nina Voychek.
Political enemies are planning her assassination—this, he knows—but now it's apparent that he, too, is a target. As he foils the initial attempts on his life, he pulls out all stops—deploying his sometimes nefarious resources—to hunt whoever is targeting him and prevent an international tragedy on American soil.
Decoded messages, Supermax prisoner interviews, mafia lawyers, and an ancient Black Mountain curse swirl among the icons of D.C. Marko and his young partner, Lucy, face down what may be multiple assassins with diverging agendas. Or are they facing one assassin—the deadliest and most elusive on the international stage?
Another new-to-me author in Otho Eskin and his second Marko Zorn thriller, Head Shot. The first, The Reflecting Pool was published last year.
I like reading books with a political context and here we have the internal politics of Montenegro playing out in Washington with a proposed assassination of the visiting prime minister. A successful hit, and power will return to the brother of the previous regime's leader. Marko Zorn bears some responsibility for said leader's death having set up him for some discontented Montengran exiles to deal with. If the assassin can get even with Zorn as well as take down the PM, all the better. Zorn has been seconded from his normal duties to assist with the PM's protection team.
In addition, Zorn is involved in the death of a celebrity actress and one of his former lovers in a kind of locked room mystery.
D.C. setting which I liked. Two for one in the investigation stakes with two cases to figure out - one to solve, one to avert. Interesting back drop with some Eastern European shenanigans and the shadow of big brother Russia interfering.
I enjoyed it overall. The main character in addition to his police work does some off the records, cloak and dagger stuff to fund his lifestyle. I didn't quite understand all the ins and outs of his shadowy sideline. Possibly reading the first in the series might have set me up better to enjoy this one. I'll come at it ass backwards and get to it one day.
Both dramas are resolved satisfactorily. We get the murderer of the former lover and the Montenegran PM lives to fight another day. As does Marko.
Nothing especially amazing or memorable here and neither was there anything annoying or objectionable. It was an okay book, one which passed some time and entertained me before my next book. Nothing wrong with it at all. No nails were shredded in the excitement, neither did I fall off the edge of my seat. I wasn't sent to sleep either.