JENNIFER LEE THOMSON - HOW KIRSTY GETS HER KICKS (2019) 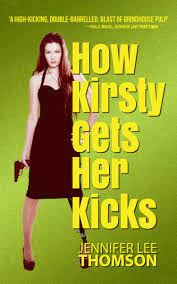 One-legged barmaid Kirsty is in a shit-load of trouble after she kills one of gangster Jimmy McPhee’s enforcers with a stiletto heel to the head after he gets a bit too handsie.

Now she’s on the run from the gang boss who loves to torture his victims before he kills them, with a safe-load of cash she stole from him and a hot gun. And she has company—a choirboy barman Jamie who just happens to be the only witness.

She needs to survive long enough to spend the cash.

How difficult can it be to catch a “daft wee lassie with one leg?” Glasgow hardman Jimmy McPhee is about to find out. Kirsty’s made a laughing stock out of him and he doesn’t like that one wee bit.

Bring together a one-legged barmaid who’s legged it with a safe load of dirty cash, a spurned gangster’s wife who wants a walking womb for her mail order sperm, a giant birthday cake and a mad chase to the end, and you’ve got How Kirsty Gets Her Kicks: one freaking minute at a time.

A short-ish book, exciting, fast-paced and full of action, adrenaline and conflict. A month on, a lot of the details have faded. No doubt, in a few month's time even more will have vanished, but that's perfectly fine. It was entertaining and enjoyable while it lasted. Did what it was supposed to do. Job done.

We have a one-legged damsel in distress. She's got herself into a fix and ultimately it's going to be down to her to get herself out of it.

Death by stiletto, a cash prize and a life on the run, fight or flight - flight until you don't have a choice, dodgy criminals, messed up families, psychos, heavies and assorted bad eggs, a torture cellar, a forced surrogacy - possibly, a dog, a kindly neighbour, and mucho mayhem.

Good fun, slightly implausible/improbable/unlikely but who cares? A decent main character who I was rooting for. Glagow setting - another plus. Lots to like.

Another author that I might be inclined to read again in the future, time and wallet allowing. 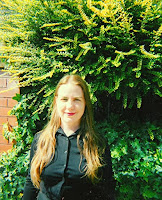