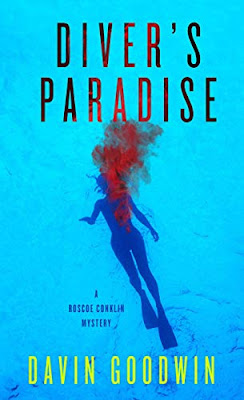 Synopsis/blurb ....
After 25 years on the job, Detective Roscoe Conklin trades his badge for a pair of shorts and sandals and moves to Bonaire, a small island nestled in the southern Caribbean. But the warm water, palm trees, and sunsets are derailed when his long-time police-buddy and friend back home is murdered. Conklin dusts off a few markers and calls his old department, trolling for information. It's slow going, but no surprise there; after all, it's an active investigation, and his compadres back home aren't saying a damn thing. He's 2,000 miles away, living in paradise. Does he really think he can help? They suggest he go to the beach and catch some rays. For Conklin, it's not that simple.When a suspicious mishap lands his significant other, Arabella, in the hospital, the island police conduct, at best, a sluggish investigation, stonewalling progress. Conklin questions the evidence and challenges the department's methods. Something isn't right...Arabella wasn't the intended target. He was.
A mostly enjoyable mystery set in the exotic location of Bonaire. I think it was a first for me reading a book set in the Caribbean.
We have a retired detective - Roscoe Conklin, upset about the murder of his former partner and his wife. Despite the distance and his current status ie thousands of miles away and no longer a serving officer, he tries to get information on the case. One of his former colleagues does some sharing upto a point.
Moving on, trouble eventually rocks up on the island and Conklin and those close to him are in danger. It's a situation where the case and the murderer come to Conklin as opposed to the other way around. I think it's one of those books where it seems as if the reader has more of a scooby what is going on than the main character, and not necessarily because we've been shown more by the author.
Conklin, likable bloke that he is seems a little bit slow on the uptake regarding a few things that seemed obvious to me. Retirement has dulled his detective's instincts maybe. Someone on the island is targeting him and those he cares about and it is so obviously related to his former partner's death, that I kind of got frustrated by the main character's savvy or lack of.
There's some pretty odious characters involved here. The murder of the partner is horrible to witness, as is the elimination of an innocent women later in the book. I don't mean that in the sense that I had to turn away from the page because of any graphic detail. It's more of a testament to the power of the author's writing, that he created such a horrible villain.
Events as they unfold are all connected to a historic case that was previously worked by Conklin and his colleague. They say revenge is a dish best served cold.
I liked the setting. The case and raison d'etre was interesting, but not particulalrly original. I enjoyed the setting. The characters were well drawn and held my interest, even though I could have happily slapped the main guy a few times. WAKE UP, MAN!