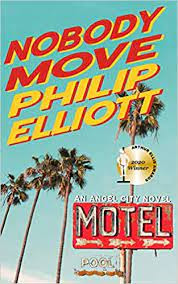 Synopsis/blurb ...
Eddie Vegas made a terrible mistake. Now he has to pay the price. After a botched debt collection turned double murder, Eddie splits, desperate to avoid his employer, notorious L.A. crime boss Saul Benedict, and his men (and Eddie's ex-partners), Floyd and Sawyer, as well as the police. Soon he becomes entangled with the clever and beautiful Dakota, a Native American woman fresh in the City of Angels to find her missing friend--someone Eddie might know something about. Meanwhile in Texas, ex-assassin Rufus, seeking vengeance for his murdered brother, takes up his beloved daggers one final time and begins the long drive to L.A. When the bodies begin to mount, Detective Alison Lockley's hunt for the killers becomes increasingly urgent. As paths cross, confusion ensues, and no one's entirely sure who's after who. But one thing is clear: They're not all getting out of this alive. As much a love letter to neo-noir cinema and L.A. as it is satire, the first book in the Angel City novels is a lightning-speed crime thriller equal parts Elmore Leonard and Quentin Tarantino.
One of the best books I've read this year and definitely one to keep for a future re-read. Nobody Move has ticks in all the right boxes.... story, character, setting, pace, length, action, excitement, humour and a satisfying outcome.
Misfortune, poor choices, consequences, coincidence, regrets, romance, sex, revenge, a search for justice .... all the fall out from Eddie Vegas's one mistake.
I do like books where the emphasis is on criminals, low-lives, outsiders. People who operate outside the boundaries of normal society, where the regular rules and mores are for others to abide by. Nobody Move with it's money lenders, debt collectors, enforcers, strippers and hitman occupies such territory. Interesting, entertaining, funny, violent, dark - my kind of book.
My sympathies throughout were with Eddie, as he tried to extricate himself from an impossible situation. Actions very often come with inescapable consequences. Debts must be paid.
5 from 5