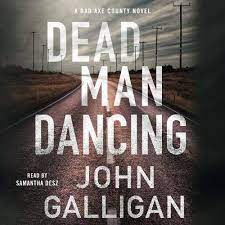 Synopsis/blurb ....
In this sequel to the “gritty, brash, and totally gripping” (The Real Book Spy) thriller Bad Axe County, Sheriff Heidi Kick is investigating an illicit cage fighting ring with ties to white nationalism when her husband suddenly goes missing.
It’s a time for celebration in Bad Axe County as the town gathers for the annual Syttende Mai—Norwegian Independence Day—festival. During this rollicking family-oriented event filled with dancing and food, Sheriff Heidi Kick discovers a dark and shocking event—a migrant worker has been savagely beaten but refuses to explain what happened. Then, a sudden murder of a band member shatters the festival. Something is deeply wrong in Bad Axe County.
As she looks for answers, Heidi plunges into a secret underworld where high-stakes cage fights double as combat training for the White Nationalist movement. Then all hell breaks loose for Heidi when her husband disappears and a secret he’s been keeping from Heidi is revealed.
An enjoyable second book in John Galligan's Bad Axe County series. Bad Axe County was enjoyed earlier this year and the next in the series, Bad Moon Rising is already lined up.
It's another busy book featuring ....... white supremacists with small town minds, fixed illegal fights, a Norwegian festival, a beaten Hispanic kid, a female sheriff in a male world, encumbered with an idiot brother-in-law, a secretive husband, and a 'difficult child.' We also have .... a dead author musician, a dodgy, untrustworthy colleague, a mixed race kid caught like a rabbit in the headlights far from home, an acid attack and to cap it off a kidnapped husband to save and an impending domestic terrorism attack to avert. All in a day's work (okay maybe a couple) for Heidi Kick.
I enjoyed the book. I do like the main character, Heidi Kick though she does seem to have trust issues regarding her husband. The author never seems to cut her a break. Maybe he is just illustrating the problems some women have balancing a career with a young family. Plenty of guilt for Heidi.

I do like books where white racist mofos get a decent comeuppance at the end. I suppose the sad thing is how easily the disenfranchised and down on their luck, buy into their lies and scapegoating. Let's blame the minorities and those different from us for all our problems. That works.
Best book ever. No, but solid entertainment with more than a few thrills and plenty of excitement along the way. Roll on book 3.
4 from 5
Read - (listened to) June, 2021
Published - 2020
Page count - 301 (8 hrs 48 mins)
Source - Audible purchase
Format - Audible
Posted by col2910 at 05:25