LAWRENCE BLOCK - BROADWAY CAN BE MURDER (aka STRANGE EMBRACE) (1962) 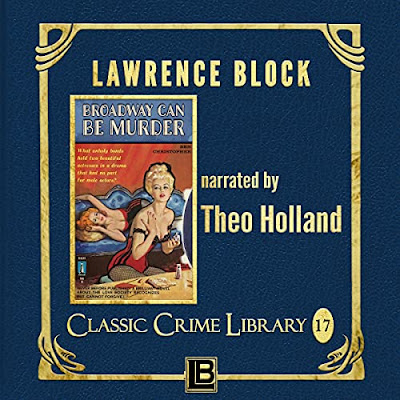 Synopsis/blurb .....
Broadway Can Be Murder started out to be a novel based on Johnny Midnight, a TV series which everyone has long since forgotten. Except, of course, that nothing manages to be forgotten in the Internet Age. I, whose job it was to knock out 50,000 words of Johnny Midnightish prose and dialogue, had forgotten when it ran and who was in it, but Google took no time at all to remind me that the title role was played by Edmund O’Brien, and that the series ran during the first nine months of 1960. I was in New York, newly married, living at 110 West 69th Street. I was writing short stories for crime fiction magazines, erotic novels for Midwood and Nightstand, and fielding assignments that my agent steered in my direction. One of these was from Beacon Books, who had acquired the book rights to a TV drama and wanted to hire someone to write a book. Beacon Books, with “Johnny Midnight” as both the book’s inspiration and its title. I wrote it, but by the time Beacon was preparing it for publication, the series had been canceled. The publisher saw no reason to pay a licensing fee for a moribund show, and accordingly changed names: Johnny Midnight became Johnny Lane, and his trusty servant morphed from Uki to Ito. And Lawrence Block became Ben Christopher for the occasion. Someone at Beacon picked the title, Strange Embrace. Well, there’s a lesbian element in the book, and I guess they wanted to play it up, and “strange” was a useful code word toward that end. Now, in 2021, Theo Holland is voicing an audio edition of the book - and I think it's high time it have an appropriate title, one that sounds like the hard-edged crime novel it is instead of the bit of erotica Beacon wanted to make it resemble. It's a murder mystery with a Broadway theater setting, so why not call it Broadway Can Be Murder?
Another early Lawrence Block book and one which was originally pseudonymously published under another title. I do like listening to Lawrence Block's work, particularly when narrated by Theo Holland.
This one has a murder mystery at its heart, with a few leanings towards titillation/erotica. I don't think you could class it as racy though. There's no more sex involved than many other straight out and out crime fiction books I've read recently.
Johnny Lane, our main character is a theatre director and is putting together a show. His unknown, young, talented lead is murdered and subsequently he and other members of the cast receive threats that the play must be cancelled or they will end up like the dead actress.
Lane, who just happens to be friends with the cop who catches the case, does some sleuthing of his own. Another member of the cast is killed in a similar fashion to the first - cut throat razor and discovered naked - and Lane gets busy.
Best book ever? No, but I really liked it. It was an entertaining outing. Lane gets a beating to go with his warning. He does some amateur investigating, running up a few wrong alleys, has a tryst or two with one of the other actresses in the show, befriends a beatnik, discovers some secrets his young starlet had, annoys his cop pal, and a few of the show's team and eventually cracks the case, just as you always knew he would.
New York setting, theatre/acting/thespian backdrop, interesting enough plot - not overly complex or convoluted. I don't think I guessed the culprit before the main character did, but I don't think I was especially trying to. I was happy enough to go where Block was taking me, in whatever time it took to get there.
Not his best work, but it kept me entertained for a few hours.