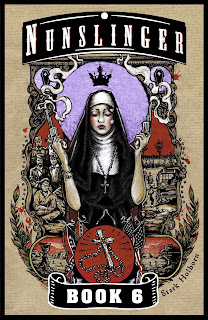 The True Tale of how Sister Thomas Josephine of St. Louis, Missouri came to Fight alongside Rebel Forces and deliver a Death Sentence in the deserts of New Mexico.

Pitted against a powerful enemy, Sister Thomas Josephine finds herself reunited with an old ally. The only problem? They're fighting for different sides.

Episode 6 and another entertaining 60 page romp.

Our erstwhile Bride of Christ is on the move again in the company of Maria, our blood-thirsty revenger aka The Owl. More trouble befalls the pair as they approach a ranch in search of sustenance and shelter.

A trip to town follows and a meeting with some Union soldiers. 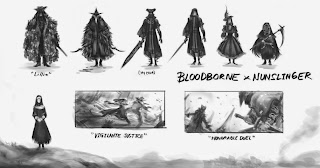 A couple of faces from the past, one feared dead form our unholy trinity at the climax of this episode as Sister Josephine, Lieutenant Carthy and Abraham Muir re-connect in our unholy trinity. Don’t you hate it when you disappoint the men in your life? Cue mayhem….

Amusing and entertaining as always, another 4 from 5.