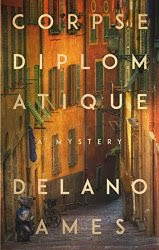 It's 1950, and Dagobert's latest obsession is Bertran de Born, the bard of Provençal. What better reason to abandon London for the South of France? But before Jane and Dagobert can settle into the rustic Provencal village he's envisioned, they find themselves stuck in Nice, embroiled in the attempted murder of the consulate of Santa Rica, and in the tangled lives of their fellow guests at the Hotel Negresco.

Another slyly witty Golden Age mystery from Delano Ames, Corpse Diplomatique is listed among the "British Mystery 100 Classics of the Genre" in The Essential Mystery Lists (Poisoned Pen Press, 2007). This annotated Manor Minor Press edition offers entertaining information about the culture of the period.

Corpse Dilpomatique is the third book in Ames’ twelve book series featuring the husband and wife team - Jane and Dagobert Brown. Jane narrates the book – she’s an author – which she is attempting to write, during the course of our case unfolding. I suppose we are reading her book, as much as we are Ames. I never quite got what Dagobert did for a living.

We are in the south of France and a man is killed by a rifle shot. The man who isn’t killed, Don Diego is a Santa Rican diplomat and he is sure this was an assassination attempt on his life, particularly as there has been some recent upheaval back in his homeland. Major Arkwright is the victim. Arkwright appears to be a much liked and popular man around the town.

The Brown’s are staying in the Pension Victoria, where Arkwright was a permanent resident. Dagobert for want of something better to do, starts making enquiries into the episode, while his wife, Jane waits for inspiration to strike as she pens her next book. A bit of a slow starter this one, but soon we have a cast of characters, hotel guests mainly, most of whom could have had a motive for wanting to see Arkwright dead. Arkwright was a blackmailer.

There’s Joe, an American bar-owner who deals currency on the black market. Dompierre, a composer and pianist who is getting rather friendly with Iris. Iris is married to Henry. Henry just happens to have been away in Santa Rica and mysteriously returns after the death of Hugh Arkwright. We have a travelling American couple, a mother – Elinor Duffield and her daughter Sophie. There’s a lot of unresolved tension in their relationship. Lastly we have Mrs Andrioli, our hotel owner who has rather unhelpfully burned all of Arkwright’s papers in an effort to relieve some of the tensions Arkwright’s blackmail victims must be feeling. Has she unwittingly made herself a target though, by perhaps reading about her guests indiscretions?

Dagobert disappears for hours at a time, Jane cultivates friendships with the guests in his absence. Each has an inkling of who could have done it and why, though we are only usually privy to Jane’s hypothesis until Dagobert chooses to cryptically inform us, later when in discussions with Jane. 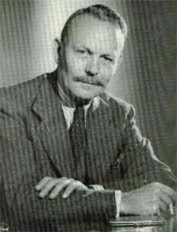 Enjoyable overall and in the end I liked it a lot better than I thought I was going to. Interesting setting - the south of France in the 50’s. You get a feel for the life of a small hotel owner and the travelling tourist.

I’m probably not minded to try anything else by Ames in the future.

Delano Ames wrote 20 novels in a writing career that spanned from 1932 until 1967. He was an American author from Ohio and died in 1987. He was the husband of author Maysie Greig. Greig herself was a prolific author.

Thanks to Manor Minor Press for my copy of this. I believe they are working at releasing more of the Brown - Ames books in the future. Their website is here.
Posted by col2910 at 00:31