QUESTIONS AND ANSWERS WITH GARY PHILLIPS 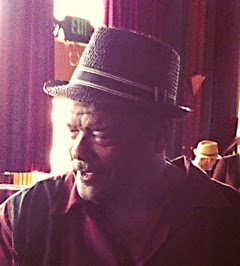 Earlier this month I read a collection of PI stories, from an anthology edited by LA crime fiction author Gary Phillips. The book - Gary Phillips'  Hollis PI allowed other authors the opportunity to play with Gary's character - Nate Hollis. 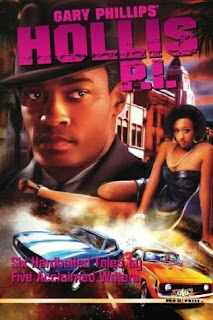 Gary was kind enough to answer a few question for me.......

I'm guessing the writing is pretty much a full-time occupation and has been for a number of years? Was there a career before becoming a novelist?

Oh yes, I've had a variety of jobs and avocations from community activist, teaching incarcerated youth, I've delivered dog cages, was a printer, graphic designer, union organizer and a communications director for a legal aid outfit, that is a publicly – state and federal monies -- funded group of lawyers aiding the working poor in regards to unfair landlord practices, immigration rights, that sort of thing. 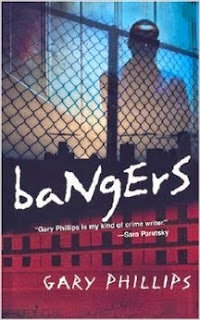 Have you always written?

I've always been a reader.  I played sports in high school, football, American football, but invariably would have a paperback in my back pocket from Dickens, Richard Wright or those Doc Savage Bantam reprints with those great James Bama covers.  And comics, Marvel comics back then.  Growing up in South Central Los Angeles, you didn't read no chump-ass Superman or Flash in those days.  Marvel’s characters had problems plus they had the first black superhero, the Black Panther.  All those stories in my head, I had to start telling my own.

What's a typical Gary Phillips writing day consist of? Do you write every day or only when you're feeling inspired?

Usually up between 6-6:30 A.M.  In fact just this morning I had to record a podcast interview at 6.  Anyway, usually make coffee if my wife hasn't, answer correspondence or send off a pitch or two, say that’s an hour or so, maybe another half hour as now I find “Facebooking” consumers time, then get to it.  At least five days a week I’m writing, often six days.  I might not always be writing prose or a script (comics or now and then a movie spec effort), but even when I’m reading my students’ work and commenting on it, I teach part-time at Antioch University, it keeps that writing part of my brain active.  Being a working class kid, to me writing is a job.  That said, you avoid becoming a hack in the rewriting.  Where you sweat, when you carve away at the words to let the story shine that’s where you pray to the Old Gods of the Forest for inspiration.

Does it take a different mind-set or mood to craft a novel as opposed to a short story? Is the process different again if you are writing a graphic-comic-illustrated piece?

A novel is like a boxing match or better yet, a marathon.  It’s about pacing yourself as the writer and the pacing you need to have in your story. This of course applies for the other forms of writing but more so in long form.  If I’m working on a book, I usually figure to write 1,000-1500 words a day.  Short story, I tend to write in bursts and a comics script, I like to shoot for getting seven or eight pages done a day.  Yet no matter the form, it all gets set aside to “ferment” for a day or two then re-read and tweaked at least but more than likely sections rewritten.

I could very well be wrong, as hands-up I haven't been paying as much attention to your work in recent years as I might have - I believe Hollis is your third series character after Martha Chainey and Ivan Monk? 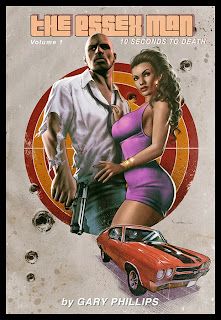 If you mean in the sense of a character showing up more than once, then I've got several others.  For instance, I've written about a character named Booker Essex, The Silencer, in two short stories set in the ‘70s (as his name suggests, he’s a take on those paperback vigilantes a la The Executioner, The Destroyer, etc.) and looking to write a third for an upcoming anthology.  Staying in the ‘70s I've got a series of short stories I’ll be doing about a female private eye in the Pam Grier mold for Pro Se’s Single Shot series. Too I've done a young superhero character called Kid Vee, by day he works in a old folks home which includes a retired masked man, in three short stories as well. And just to be blatantly self-promoting, the stories featuring those two can be found in my Astonishing Heroes collection.

Do you have a favourite of the three? Who is the smartest and who is the toughest? Which one would be left standing after a fight?

Hmmm, I’ll take the fifth as we say here in the States – the Fifth Amendment to the U.S. Constitution is about incriminating oneself on the stand, in the docket as it were. 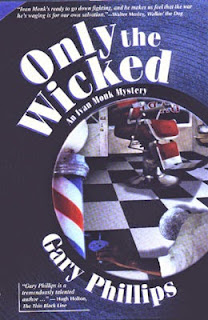 How did the idea for Hollis PI come about?

He had quite the incubation.  Originally for DC Comics Vertigo imprint I was going to revive this soldier character from an old title Man at War, Ulysses Hazard, aka Gravedigger.  An interesting character, a black soldier, a captain, operating behind enemy lines in the segregated armed services of WWII created by David Michelinie and artist Ed Davis – depicted sometimes on the covers by the great Joe Kubert.  I was going to set Hazard post war, the 1950s, a police detective in Harlem, the historic black section of New York City.  But as I messed with the character more and with input from my editor, Nate Hollis, modern day Los Angeles PI was born.

Did it feel strange loaning out one of your creations for other writer's interpretations?

Not strange so much as curious.  I did provide each writer a mini-bible on the character and the others in his life, his arena and so forth.  Maybe because Nate first started in comics, I don’t feel as possessive of him as I might with one of my other characters.  When I sent the writers my notes, I did push for consistency with the character in terms of his outlook, how he might react in a certain situation, that sort of thing.  Probably a bit more of a heavy hand than say when I've edited an anthology of short stories but not a story with my character.

The Hollis line-up is all A-list, baby.

Will we see more in the future with Nate? I kind of think he still seeks answers regarding his father's death, or am I hoping in vain?

You are correct, Col.  In fact, what I really want to do is reverse course in a way, do a graphic novel where Nate and we learn the answer to his father’s murder.

Have you reclaimed him entirely or is he still available for secondment to other writers?

For the time being, given my previous answer, I’ll be taking the reigns back.  Other projects call but probably toward the end of this year, will begin work on a Hollis novella.  But I wouldn't rule out more stories about Nate and company by other writers further down the line. 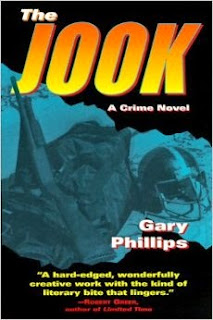 If you could lay only one of your books on prospective readers, which one? Is there one you value above the others?

I value all my children but perhaps if the gun were to my head and I had to pick just the one, I’d say The Jook.  It’s the only novel I've written in first person.  It’s a noirish story of a professional athlete, an American football player, who returns to Los Angeles as the city gets a new team and it’s his one last shot at the big time.   It’s my wife, Gilda’s favorite.

Who do you read for enjoyment? Anyone that should be on my radar but isn't?

I recently learned of a couple of forgotten writers.  One was named Jim Tully of the Jack London school (Tully was a hobo, a boxer and so on including being a publicist for Charlie Chaplin) whose gritty books written in the 1920s, Beggars of Life and The Bruiser to name two, I want to get to as well as a writer named John Lawrence.  Apparently he’d been a stockbroker then after the Crash of ’29 became for a while a pulp writer.  Among other work, he wrote a series of short stories about the Marquis of Broadway in Dime Detective that have been collected by Altus Press.  I’m looking forward to reading as well. 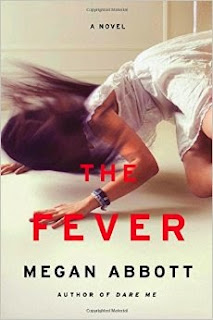 As it happens, me and the wife belong to a book club specializing in non-fiction with our lefty friends plus my students and I have fiction books we read in common and comment on.  Thus, Big Roads: The Untold Story of the Engineers, Visonaries and Trailblazers who Created the American Superhighways by Earl Swift, The Bounty Hunters by Elmore Leonard (his first published book, a western, from the ‘50s), The Sirens of Titan by Kurt Vonnegut, Cotton Comes to Harlem (re-read after decades) by Chester Himes, and Two Cheers for Anarchism by James C. Scott.  Also, currently reading The Fever by Megan Abbott.


Is there one all time favourite book you wish you had penned?

Written long ago, in fact at first serialized in the pages of Black Mask, but Hammett’s The Maltese Falcon still stands as the template for many a private eye story.  His Red Harvest ain’t too shabby either. 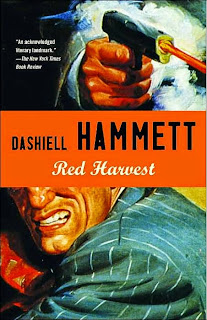 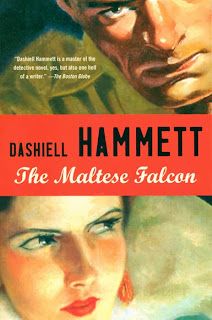 How do you relax when not writing?

I watch TV, both news shows and episodics.  And now with TiVo’ing, on demand, steaming and what not. I’ll tape and then binge watch like I did with Daredevil from Netflix recently.  I’m a fan of Arrow, The Blacklist, Person of Interest, Breaking Bad and Justified when they were on, Better Call Saul, Mad Men, Game of Thrones, Gotham, Blackish, and watch way to many reruns of The Big Bang Theory.  Oh, and the gym, where working out helps clear my head, .though, sadly, not much about my gut -- but I'm coming to suspect it could be the beer and vodka I imbibe that doesn't help.

Two current projects are linked anthologies.  The first, which I solo edited and wrote four of the stories for it is out now, called Day of the Destroyers.  It takes off from a real incident where retired Major General Smedley Butler alleged in the 1930s that certain right wing business interests were interested in him leading a coup against President Roosevelt.  The so-called Business Plot is the basis for Destroyers wherein Jimmie Flint, Secret Agent X-11 races across the country in the linked short stories/chapters to prevent this from happening.  Pulp stalwarts the Black Bat, the Green Lama and the Phantom Detective guest star as well as real life personages Butler and Martha Gellhorn, a famous war correspondent and once a wife of Hemingway. 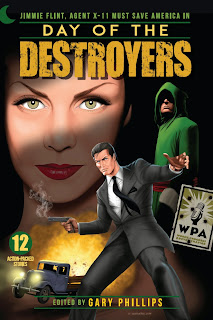 The second one which I co-edited and contributed to drops in October, Occupied Earth.  Quite simply the premise is the aliens have come and conjured our planet for strategic reasons, yet life goes on.  Watch the skies for that one.

Any advise to prospective authors?

Many thanks to Gary for taking the time to humour me with my questions.

You can catch up with the man himself over at his website here.