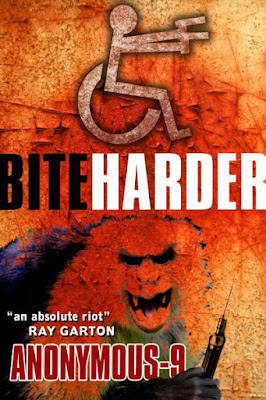 Some say he's a serial killer. Others, a vigilante doing what police can't or won't do. What's certain is that Dean Drayhart, a paraplegic, will soon sit on death row for killing hit-and-run drivers in Los Angeles. But not if the Mexican Mafia gets hold of him first. Somewhere, Dean's trained companion monkey Sid and girlfriend Cinda are outrunning the law in a fast '98 Trans Am. The Los Angeles Sheriff's Department wants Sid, dead or alive. Dean may be broken in body but his fierce spirit is determined to protect Sid and Cinda in the most creative ways imaginable. Hardboiled, funny, relentless, and unexpectedly tender-hearted, Bite Harder delivers riotous action all the way to a bombshell climax that could only have been written by Anonymous-9, the self-declared mad scientist of crime fiction.

My third time around the block with Elaine Ash – aka Anonymous-9. Bite Harder is the sequel to Hard Bite a novel which introduced us to Dean Drayhart. Dean is a paraplegic – the result of a hit and run accident; an accident that not only cost him his legs but his family. Since then he has been revenging himself, by tracking down other hit and run drivers and unleashing his trained carer monkey Sid on the guilty with the instruction “Hard Bite!”  Not a pretty way to die.

Drayhart is in prison now, but not for long. One of his victims was a member of a Mexican crime family and the matriarch wants him dead along with his trained monkey. The Mexicans unwilling to trust in the US justice system, bust him out of jail in order to kill him, as slowly and painfully as possible.

Drayhart has a semi-death-wish, wanting to be re-united with his wife and daughter, so he’s kind of philosophical about his intended fate. He does have a fierce loyalty towards his replacement family – Sid the monkey and Cinda, his sex-worker girlfriend. When they are threatened, he decides to live a bit longer.

Outlandish, pacy, furious, and funny by turn Anonymous serves up just the right blend of action, thrills and comedy.

Bribery, prison break, murder, cops, kidnapping, proposed sex-action with a rich geriatric, family – albeit a highly dysfunctional and inept criminal enterprise, with a hot Mexican widow mama and some less than capable off-spring, a few old people with a fondness for a kind-hearted hair-dyed helper primate, a scheming entrepreneurial nephew and lots more.

Only in LA, I think……..a fantastic read, obviously the product of a warped, disturbed but brilliant mind. 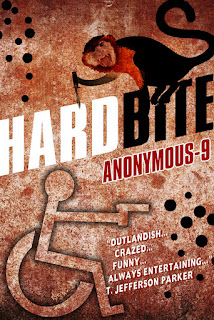 Some of Elaine’s short stories were reviewed here – JUST SO YOU KNOW I'M NOT DEAD.

The lady herself was kind enough to submit to a Q+A session last year, here.

You can catch up with here at her website – here, 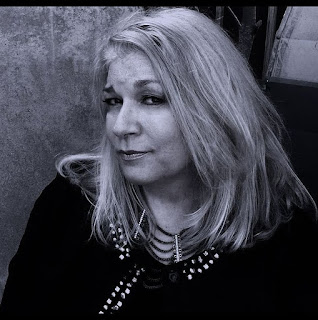 Anonymous 9 was kind enough to send me a copy of this and I subsequently bought my own afterwards.
Posted by col2910 at 00:29