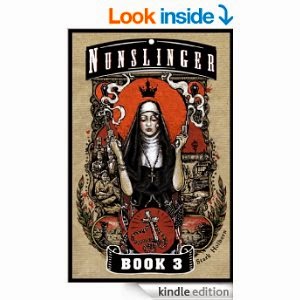 NUNSLINGER Book III finds Sister Thomas Josephine, now a fugitive from the law, racing through the harsh Sierra Nevada winter for the Mexican border. Hard on her heels is an old enemy... with a grudge the size of Texas. And she knows that if the cold doesn't kill her, he will.

Despite enjoying the first two instalments of this 12 episode saga, I neglected it in April, only reading the 3rd episode on the last day of the month. I don’t really know why as I am enjoying following the exploits of our Sister Josephine.

Episode three sees Josephine and her travelling companion Abe Muir fleeing from a town after our nun starts a mass brawl in a saloon; captured by a railroad crew who initially fear them of spying for a rival outfit, before production of a dead or alive wanted notice with a $100 bounty on our Sister’s head reveals their true identity. A slip by our captors sees the pair fleeing again.

But it’s another situation where they've swapped the frying pan for the fire – in this instance exposure to the harsh realities of a mountainous winter, all the while being pursued by the legendary bounty hunter, Lillie.

Muir and Josephine survive (obviously) and continue their trek to Sacramento and sanctuary with Father Laverman. Another cruel betrayal sees our pair back in the hands of the syphilitic and vengeful Lieutenant Carthy.

Great setting, great characters – more of an adventure story a la Indiana Jones only 100 years earlier and if Jones was a nun and she isn't seeking treasure.